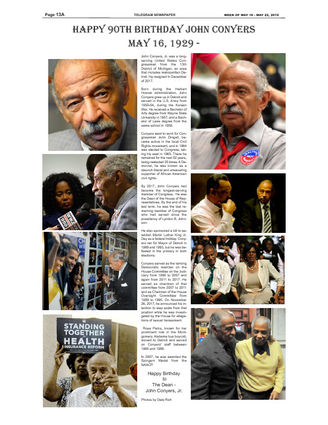 John Conyers, Jr. was a long-serving United States Congressman from the 13th District of Michigan, an area that includes metropolitan Detroit. He resigned in December of 2017.

Conyers went to work for Congressman John Dingell, became active in the local Civil Rights movement, and in 1964 was elected to Congress, taking his seat in 1965. There he remained for the next 52 years, being reelected 25 times. A Democrat, he was known as a staunch liberal and unwavering supporter of African American civil rights.

He also sponsored a bill to establish Martin Luther King Jr. Day as a federal holiday. Conyers ran for Mayor of Detroit in 1989 and 1993, but he was defeated in the primary in both elections.

Conyers served as the ranking Democratic member on the House Committee on the Judiciary from 1995 to 2007 and again from 2011 to 2017. He served as chairman of that committee from 2007 to 2011 and as Chairman of the House Oversight Committee from 1989 to 1995. On November 26, 2017, he announced his intention to step aside from that position while he was investigated by the House for allegations of sexual harassment.

Rosa Parks, known for her prominent role in the Montgomery, Alabama bus boycott, moved to Detroit and served on Conyers' staff between 1965 and 1988.

In 2007, he was awarded the Spingarn Medal from the NAACP.