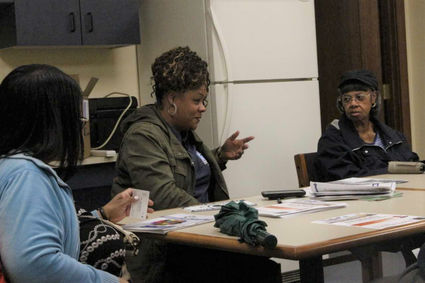 State Rep. Leslie Love talks with voters at the Redford District Library on May 13.

Michigan State Representative Leslie Love, who represents the 10th House District, held her monthly coffee hour with her constituents on Monday, May 13. The event was held at the Redford District Library, as Love's district comprises Redford and a portion of northwest Detroit.

Love touched on the issue of high auto insurance rates, but the main focus was on mental health in the community. Love's guest was Ray Schuholz, a peer mentor with Community Living Services and ambassador for Detroit Wayne Mental Health Authority (DWMHA). Schuholz shared his story about being institutionalized as a child due to a developmental disability and the trauma involved. Schuholz says he later entered the foster care system and was raised by a caring foster family, eventually graduating high school. His story was one of overcoming obstacles to find personal achievement. "Don't look at a person with a label, look at a person the way you want to be treated," he said. "That's the bottom line of it all, is treating people with respect."

Schuholz also gave an overview of services and resources available through DWMHA and explained his role as a peer mentor and ambassador, helping others who receive services through DWMHA. 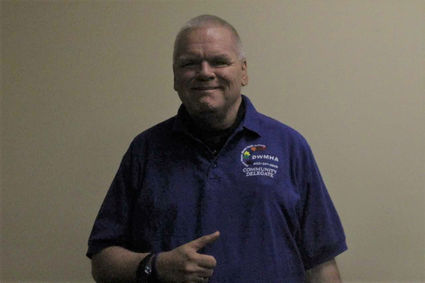 Ray Schuholz addressed Rep. Love's voters on the importance of treatment resources for mental health issues in the community.

Love followed up with describing the work DWMHA does to help adult learners. Volunteers assist those who wish to improve their reading and comprehension skills, math, and computer skills. Love explained that lack of such skills can be a barrier to gainful employment, and that illiteracy rates in Wayne County continue to be high. Love added that DWMHA provides services to children as well, including those with autism.

Representative Love holds her coffee hour on the second Monday each month from 10:30 to11:30 a.m. The next coffee hour in Redford will be on June 10 and the theme will be the League of Michigan Bicyclists.

The Redford Township District Library is located at 25320 West Six Mile Road. No coffee hours are planned for July and August, but they will resume on September 9 at a new location, the Detroit Public Library Jessie Chase Branch, located at 17731 West Seven Mile in Detroit. For more information and other events go to http://www.love.huseedems.com.