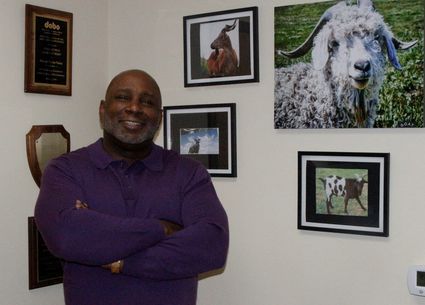 Mayor Nolen in his office in Inkster

Inkster Mayor Byron Nolen wants to introduce his city to the rest of the region. In order to accomplish that, he has been working steadily on numerous enhancements to the city since his election to the office in November of 2015.

Previously working as an attorney, Nolen was trying to decide which mayoral candidate to support early in 2015 when someone suggested to him that he run for mayor himself. While being an attorney had always been his dream, Nolen began to consider the impact he could make on the city he grew up in if he were mayor. He looked around and knew there was work to be done, and it made sense to him that he could be the one to help accomplish all the city needed.

He joined the race for mayor. "Many of the people who were going to run, got behind me because they believed in me," Nolen recalls. He won with 87 percent of the vote.

In his first year as mayor, Nolen served only part-time in the role, due to the presence of a city manager. Despite that fact, he was able to meet with officials at the Michigan Department of Treasury and convinced them to release the city form its consent agreement which had been arranged in order for the city to pay off its debt. Inkster was considered financially stable and it was a big deal for the city. Nolen pledged to keep the city living within its means and to find fresh avenues of revenue.

A few weeks after winning the election, Nolen wanted to hear what the residents had to say, so he began Lunch with the Mayor, a monthly event which has garnered approval from residents. "We have good food, they get to talk to me...they can say whatever they want," Nolen says. "We laugh, we joke, and we actually get down to business and get information out so they know what's going on, and they let me know what they want me to do, which is a big part of this job."

The next step for the new administration was to rewrite the city charter, changing the form of governance from a city manager to a mayor-council. In November 2016 the new charter was placed on the ballot and was overwhelmingly approved by Inkster residents.

With the passage of the new city charter, Nolen took over the day to day to operations of the city's business. His administration established a Neighborhood Stabilization Program, now in its third year. The program acquires foreclosed, often blighted homes, in the city and sells them to vendors who renovate and either sell or rent them out. Nolen says the program increase home ownership in the city

while increasing the look of the neighborhoods. "The residents are noticing," he comments. "It makes a difference."

Under Nolen's leadership, Inkster has reestablished an Animal Control Department within the Ordinance Enforcement Department. The city also expects the new Inkster Public Library to open to the public early in 2020.

Nolen explains that for nearly 25 years, the city, its services, and its growth had become stagnant. "The prior elected officials had no vision to change or transform the city. You don't stay the same," he says. "You're going up or you're going down, it's one of the two. So we have to go up." Part of the plan for upward movement for the city will be redevelopment of the downtown district near the intersection of Inkster and Michigan Avenue. The city received a grant from the state of Michigan last year, which will help get things started. "We're trying to change Inkster from a city you drive through, to become a destination," Nolen says. Restaurants, retail spaces and apartments are part of the ambitious plan.

The lower Rouge Parkway runs through Inkster, and Nolen says Friends of the Rouge will be assisting the city to establish a canoe launch at one of two county parks within the city. "The backdrop of our development is these two beautiful parks," he says. Both parks lie near the downtown area and Nolen explains canoers can paddle from the western suburbs all the way to the Detroit River, stopping in Inkster along the way. "People could stop here, get off, have dinner, hang out, and get back in the canoe and keep rolling--another way to create Inkster as a destination." 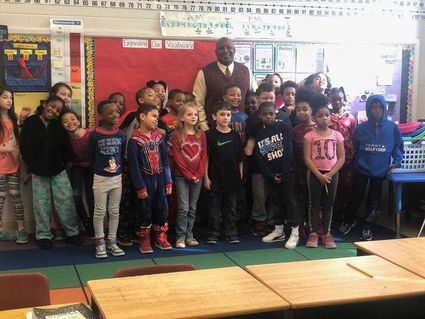 Mayor Nolen at a youth event in Inkster, interacting with children

The county parks and the greenspace they provide are an asset the city wants to showcase. "We want to change how people view us, and we want to get them here so they can spend some time here and enjoy themselves at family-friendly events."

Nolen says he's just a regular guy who played sports as a young man. As a University of Michigan graduate, he is a loyal Wolverine. As mayor of the city, he is a loyal resident and neighbor. His job keeps him occupied seven days a week, but he enjoys it. He says there is a strong sense of community in Inkster and he derives satisfaction in seeing the residents happy with the progress the city is making. "I see positive things on the horizon," he says, "and I want to be part of what makes that happen."

If you are an Inkster resident and need help with city services or wish to inquire about Lunch with the Mayor, see the city website at http://www.cityofinkster.com or call 313-563-4234.