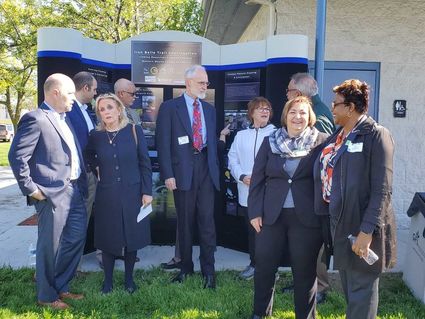 Within the Downriver area, the project spans multiple municipalities and affects more than half a million residents. The overall goal of the project is to strengthen connections between the Downriver Linked Greenways and the Hines Park Greenway to Detroit Greenways, ultimately serving 1.75 million people in the Detroit Metro region.

The project will increase bicycle access to parks, including Lake Erie Metropark, and will stretch from Flat Rock to Detroit along the Iron Belle Trail and west through Hines Park to Northville. It will improve trail-road crossings and trail gateways, and create a new park commemorating the 1932 Hunger March in Southwest Detroit.

"This project provides long-awaited plans to fill gaps in southeast Michigan greenways and will implement some exciting features along the way. It will greatly increase the quality of life and recreation throughout the area," said David Howell, board chairman for FDR.

Downriver Linked Greenways' Anita Twardesky, agrees. "Since 1998, Downriver Linked Greenways has strived to connect our communities via a comprehensive trail system. This system provides opportunities for both recreational use and non-motorized transit. In addition, access to our natural resources is key to our region for both economic development benefits and recreation use."

"You can't go from Western Wayne County to Belle Isle or Detroit to Downriver on a bike, and that's a shame," said Wayne County Executive Warren C. Evans. "This has the potential to connect Wayne County through trails in a way it hasn't been before. We've identified at least 29 access points that are going to make it easier for residents to access Hines Park and the Mill Run Project, while better connecting them to a larger network of trails through the Rouge River Gateway Corridor."

The Iron Belle Trail Continuation project, and the Ralph C. Wilson, Jr. Foundation Grant, are the result of years' worth of partnering between the groups involved in the project. The initial gap study began in 2015 and identified key areas that would complete and strengthen this segment of the Iron Belle Trail. From there the five groups came together to shape a larger vision.

The groups identified seven major tasks in the project, outlined briefly below. Work begins immediately on the Iron Belle Trail Continuation Project. For more information, contact Friends of the Detroit River at http://www.detroitriver.org

1. Route Gap Planning, Design and Engineering: Adding more than three and a half miles of trail in Detroit and Downriver communities to fill gaps in the statewide Iron Belle Trail.

3. Marketing and Branding Plan: Promoting Destination Downriver, a collaborative effort to recognize the regional trail network as an important tourist destination and an asset to the region.

6. Fort Street Bridge Interpretive Park Construction: Transforming a neglected urban space into a landmark park in the city's most industrial zip code, 48217. The new park will commemorate the 1932 Ford Hunger March, a major turning point that ultimate led to the formation of the United Auto Workers Union, and serve as a resting space along the Iron Belle Trail where the Downriver Linked Greenways, Detroit Greenways and connector to Hines Park Greenway intersect.

7. Capacity Building and Project Sustainability: Ensuring long-term sustainability for our trail system, funds will go toward pursuit of implementation dollars for planning tasks moving forward and establishing maintenance agreements and ensuring that all aspects of the project remain on track and successful for many years to come.

About Friends of the Detroit River