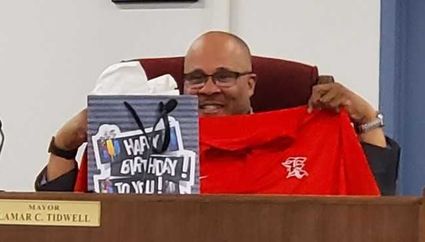 Mayor Tidwell shows the Ecorse School District T-Shirt that was presented to him for his birthday from the Ecorse school board.

Ecorse Mayor Lamar Tidwell says good things are happening in his city. The graduate of Ecorse High School says for the past decade, property values had been going down in the city; however, this past year, for the first time in a long time, residential property values are going up. Residents are also now receiving city services which had previously been contracted out at great expense to the city.

While eliminating blight in the city continues to be a demanding task, Tidwell concedes that it will not be a quick fix. The city is making use of more than $2 million in federal funding to address the problem.

"Blight is the whole key to the success of any community," says Tidwell. "Who wants to move into a community when you've got burned up houses, burned up buildings in that area?" A blighted community does not attract new businesses, adds Tidwell. "You've got to clean up before you get people to invest in your community," he says, adding that blight is everyone's problem, and says homeowners can play a role as well by reporting blight and keeping their own property maintained. Tidwell says the Ordinance Enforcement Department is compelling compliance to city ordinances in an effort to improve the looks of the city, not to pick on residents. He says, "We're adamant about cleaning up this community."

In addition to cleaning the city up, new home construction is appearing and goes by the name of Renaissance Estates. Tidwell says the name is intended to erase the mental image of housing projects and the stigma associated with them. The construction of new homes is partially completed and some residences are occupied. Tidwell expects construction will hasten now that the weather is warmer.

Tidwell believes small communities must have a long-term vision for the future in order to survive. "We can't just think about today and tomorrow, we've got to think about down the road," he says. He emphasizes that what is best for the community must be priority when setting future goals. The city has received a grant from the state to assess the properties along the Jefferson Corridor, and decide how to best redevelop them to make optimum use of what Ecorse already has. One goal Tidwell has is to add bike lanes along Jefferson Avenue for both recreational and practical purposes.

The mayor is looking ahead to the completion of the Gordie Howe International Bridge, which is expected to be completed in 2024. Tidwell says Ecorse ought to be able to draw in visitors who will be using the bridge, by creating a small-town atmosphere, complete with shops and restaurants. Tidwell cites the accessibility of Dingell Park as a potential lure for visitors to the area. "We want people to be able to come down here and sit and spend money in Ecorse," he says. "We want to make it attractive to people to want to come to the town." The city has in recent years been adding community events to draw in visitors, such as a chili cook-off, fireworks show, and a Walleye Tournament. This year the city will add a car show and Movies in the Park to the list of family-friendly activities. A summer classic car cruise is under consideration as well. 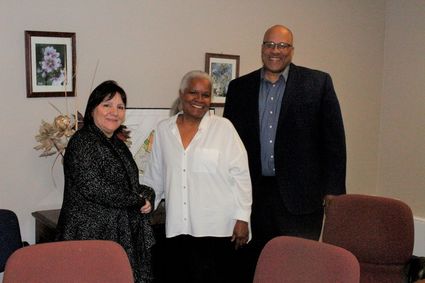 Tidwell says that while the city has had a balanced budget for the past five years, creating jobs and finding revenue continue to be the challenge. He suggests that tackling environmental issues which need to be addressed may provide a solution. Large corporations, particularly in this region, resist adhering to regulations because it interferes with profits, says Tidwell. Releasing harmful emissions and chemicals into our air and water is common practice and comes with risk, he adds, saying, "But if you don't attack this issue now, what do you think is going to happen in 10 or 15 years?" Tidwell says relying on alternative energy sources can create jobs that will benefit residents in the region. "The healthier a community is, the better a community is," he says.

Tidwell says he derives satisfaction from seeing a project put together from the beginning to the end and see its success. Many small successes can make a big difference, Tidwell says. "We got some areas that we still need to work on and we need to make better," he says. "We don't have a lot of employees, but we do a good job with what we have. "