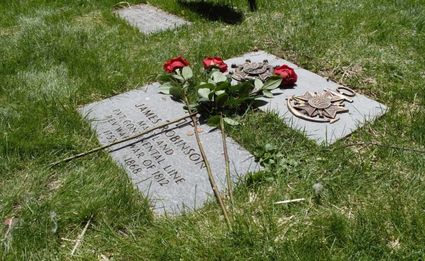 Military honors were performed over the grave of Pvt. James Robinson

DETROIT – A three-volley rifle salute, the playing of taps, and the presentation of an American flag to the next-of-kin or family representative: these rituals are customarily performed at the funeral services of nearly every American veteran as a symbol of their faithful and dedicated service.

Saturday, those honors were rendered for the first time over the grave of Pvt. James Robinson, a hero of the American Revolutionary War and the War of 1812 decorated by the Marquis de Lafayette at the Battle of Yorktown. Robinson died in 1868 and had since lain below a nondescript marker that belied his incredible story and the mark he left on history. The Michigan Society of the Sons of the American Revolution and the Michigan Society of the War of 1812 also dedicated an engraved headstone Saturday that symbolizes the wars in which Robinson fought.

"Pvt. Robinson's military accomplishments are extremely impressive," Isabelle said. "But they are even more noteworthy given that he risked his life to secure the freedom of a young nation that didn't recognize his right to personal freedom."

According to Elijah Shalis, an historian and member of the Michigan Society of the Sons of the American Revolution, Robinson was born into slavery in 1753. He fought in both wars with the understanding that by doing so, he would earn the right to live as a free American. That promise was not kept and Robinson was forced to wait decades for freedom.

Records, including a memoir dictated by Robinson in 1858, say he led a charge against a British fortification at the Battle of Yorktown in 1781, single-handedly killing three enemy soldiers. It was for this feat that the allied French commander, General Marquis de Lafayette, presented Robinson with a gold medal for valor.

Originally from Maryland, Robinson was later sold to a plantation owner in Louisiana. At the age of 61, he fought in the Battle of New Orleans where he lost his left index finger. He did not gain his freedom until sometime in the 1830s, and afterword relocated to Detroit, which became his adopted hometown. Robinson is said to have lived to the remarkable age of 115.

"Robinson died in 1868, so this is an event 151 years in the making," said Shalis. "He was one of, if not the most distinguished African-American veteran of the wars he served in."

In addition to many city of Detroit officials, Saturday's ceremony was also attended by Rep. Rashida Tlaib, of Michigan's 13th Congressional district.

"One of the incredible things that can be done in Congress is to speak about those who have honored and served our country in the Congressional Record," Talib said. "All of us fight for our communities in different ways, but it's always about giving back. To recently speak into the Congressional Record about Pvt. Robinson as someone from a different generation who was fighting for us, uplifting his incredible legacy...was a very humbling experience."

Though the honors rendered Saturday in Robinson's memory are fitting, the real impact of his service can be measured in other, more substantive ways across the U.S. military today..

"The heroism of Pvt. Robinson was honored with medals and accolades during his lifetime," Isabelle said. "However, I believe his true legacy lies in the long list of African-American military members who have followed in his footsteps – and a military today that values diversity and welcomes all Americans who wish to serve."

For more information on the life of James Robinson visit https://docsouth.unc.edu/neh/roberts/roberts.html