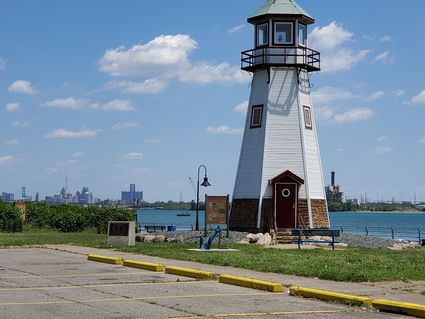 The industrial suburb of River Rouge is celebrating its inclusion in a Community Benefits Plan announced earlier this month in Windsor by the Windsor-Detroit Bridge Authority and Bridging North America. The public and private entities are responsible for the development of the Gordie Howe International Bridge, which is expected to be completed by the end of 2024.

River Rouge Mayor Michael Bowdler proclaimed "It's a great day for River Rouge," upon learning the city would be the only downriver city included in the benefits plan. Bowdler added, "We are very excited that the Gordie Howe Bridge, when constructed, will literally make landfall right on our doorstep. We are just a mile or so south of their construction site."

Bowdler emphasized that the construction of the Gordie Howe International Bridge will be the largest infrastructure project the region will ever witness up close. "It has the potential to be a once in a lifetime opportunity for us in River Rouge to reinvent ourselves as a community, we cannot afford to miss this chance."

The Community Benefits Plan calls for the construction of an observation platform to be erected at Belanger Park on the banks of the Detroit River in River Rouge. The platform will allow students, residents, and tourists the opportunity to view ongoing construction of the new bridge project. The 9.5-acre park will also receive features which include benches, signage, coin-operated binoculars, and a photography area. In addition, city officials hope to install a webcam on the Mariners Memorial Lighthouse, located within the park, to live-stream the construction and a time-lapse video recorder to maintain a historical record.

River Rouge teamed up with the city of Ecorse to secure funding from SEMCOG to install a 3-mile long bike path along Jefferson Avenue, starting at the southern border of Ecorse and extending north to the Rouge River, eventually tying into the Gordie Howe Bridge.

Bowdler said he hopes construction of the bridge builds momentum for other improvements in River Rouge, including a splash park in the city's Memorial Park, a bandshell at Belanger Park for hosting summer concerts, along with updated restrooms.

"We in River Rouge strongly believe that the construction of the Gordie Howe Bridge will generate a renewed interest in our community, and the increase in attention will spur development in our central business district, as well as our residential neighborhoods," Bowdler said. "River Rouge is the gateway to Downriver and we stand ready to share this historic construction project with our neighbors."