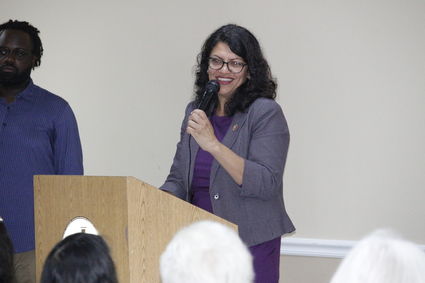 The voter's town hall in Dearborn Heights was co-hosted by Congresswoman Rashida Tlaib.

Michigan's 13th Congressional District held a town hall to inform residents about changes in the state's election process and how those changes affect voters and their communities. The town hall was held at the HYPE Athletics Center in Dearborn Heights on the morning of Saturday, July 20.

The event was hosted by Congresswomen Debbie Dingell and Rashida Tlaib. Featured speakers included Sharon Delonte of the American Civil Liberties Union (ACLU), Khalilah Spencer of the National Association for the Advancement of Colored People (NAACP), Betsy Cushman of the League of Women Voters (LWV), Jim Pederson of the A. Philip Randolph Institute, Jamie Lyons-Eddy of Voters Not Politicians, and Heaster Wheeler representing the office of Secretary of State Jocelyn Benson.

Last year's passage of Proposals 2 and 3 was reviewed and heralded as a victory for voters. Proposal 2 will create an independent commission made up of Michigan voters, rather than state lawmakers, to listen to input from residents and draw and approve new voting districts. The new districts should reflect population and racial diversity within each.

"It's not enough to have people registered to vote," said the NAACP's Spencer. She emphasized the importance of civic engagement, being informed on the issues, and knowing what candidates stand for.

Cushman, of the LWV, echoed the sentiment and said, "Defending democracy takes many forms. Be an informed voter, then inform your neighbors and friends."

Pederson explained how his organization, the A. Philip Randolph Institute of Detroit/Downriver has been working on voter engagement and voter registration, particularly registering high school seniors to vote.

The Secretary of State's Wheeler applauded with Pederson's work. "If we had a secret weapon, it's our young people," Wheeler said. "Research shows if young people vote at the very first opportunity they get to vote, they vote for the rest of their lives."

The town hall ended with a question and answer session, with representatives of the organizations involved opting to answer the various inquiries put forth by residents. About 80 people were in attendance.