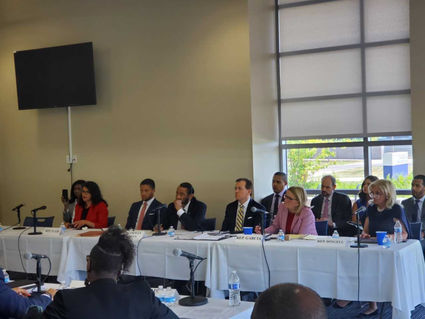 11 years after the start of the recession and housing crash, the ripple effects are still felt acutely across Detroit and Wayne County, members of a U.S. House subcommittee heard at a field hearing in Detroit on Friday.

The issues are complex, but the numbers are stark: since the housing crisis began in 2009, Detroit has flipped from a majority-homeowner to a majority-renter city. That's due in large part to the wave of mortgage and property tax foreclosures that swept the city in the following years.

That's also helped foster a paradox: even though cheap property is abundant in Detroit, that doesn't mean it's affordable for poor and working-class households. That's in part because those households can't afford to pay cash, but loans for those cheaper properties are difficult to come by.

Lower-income home buyers looking to buy relatively low-value properties are "not well-served by existing financing mechanisms," Taz George, a housing researcher with the Federal Reserve Bank of Chicago, told members of the House Financial Services Subcommittee on Oversight and Investigations.

This situation has led to a surge in land contracts, or lease-to-buy deals, especially in Detroit. But those contracts are largely unregulated, and offer fewer protections than traditional mortgages or even leases, and tenants can be evicted even if they've put substantial investments into the property, George said.

Ted Phillips, director of Detroit's United Community Housing Coalition, agreed. He said that Detroit's 36th district court now processes about 30,000 landlord-tenant cases a year, but only 4% of people coming through the court have legal representation. That can lead to people being evicted from their home without even understanding what happened, he said.

Phillips also called on Congress and the city of Detroit to provide more federal Hardest Hit Funds that are specifically focused on keeping people in their homes. Detroit has received more than $250 million in HHF money, but the vast majority of it has been funneled into demolitions.

"The fact that you can use funds to tear down homes to eliminate blight, but you can't use the same damn funds to help people stay in their home to prevent blight, is ridiculous," Phillips said.

Panelists told the four lawmakers who attended the hearing-Michigan Reps. Rashida Tlaib (D-Detroit), Brenda Lawrence (D-Detroit), and Reps. Al Green and Sylvia Garcia (both D-Texas)-that federal funds to assist people with housing instability are scarce in general, especially in a city like Detroit, where most renters live in single-family homes.

Green, who chairs the subcommittee, says he believes "there are several things we can do" to attack the situation. The first is to do "testing" for ongoing racial discrimination in lending practices. Mortgage lending is just starting to rebound in Detroit, but in 2017, black Detroiters received just 48% of all home-purchase loans, despite making up nearly 80% of the city's population, according to a Bridge Magazine analysis.

Green says that for owner-occupants of foreclosed homes, a "last-chance purchase piece of legislation may be appropriate" to give them a final shot at purchasing that home. And he says land contracts need to be more strictly regulated. "I do believe that these instruments...should be examined such that there are standards that are set, and possibly at a national level in a very general sense," Green said.

Tlaib echoed a call for "reparations" for homeowners who lost homes to tax foreclosure when those properties were over-assessed in violation of the Michigan Constitution, leading to falsely inflated property taxes.

"This is just one element that recently happened in our decade," Tlaib said. "Reparations [are] needed because of some of the structural racism that continues...this is proof that we still have some really deep-rooted racism within our policies."

Lauren Mason told the congressional panel how she lost the Detroit home her grandparents bought in 1968 to tax foreclosure. She said the home was over-assessed for a total value of around $140,000-it sold to an investor at auction for just over $40,000.

Mason said she challenged that assessment to no avail, and was denied Detroit's property tax exemption for those living in poverty, even though she qualified for it. She said she didn't fully understand the process and was working on paying off her back taxes when she came home from work one night to find her locks changed, and all of her possessions tossed out of the house.

Since then, "It's been impossible to find adequate, affordable housing," said Mason. "Speculators have changed the fate of our neighborhoods for the worse."