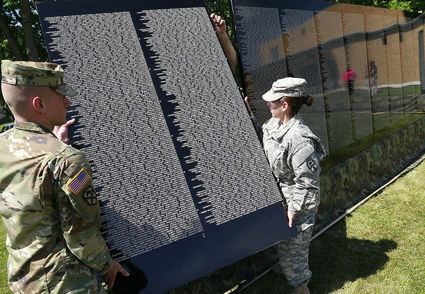 The Vietnam War ended more than 40 years ago. Nearly 59,000 Americans gave their lives in the struggle, which was controversial and unpopular. For those families who lost a loved one, even for those who returned from the war, healing and closure can sometimes be elusive.

But this month, Vietnam Veterans will receive honor as the Vietnam Moving Wall will be on display in Livonia's Ford Field beginning Thursday, August 8. The wall is expected to open to the public at noon and will remain open 24/7 until Monday, August 12.

The Moving Wall is a mobile half-size replica of the Vietnam Memorial Wall in Washington, D.C., which was dedicated in 1982. The Moving Wall was constructed by Vietnam Veterans who realized the memorial provided something positive about their experience. It first went on display in Texas in 1984 and has been touring the country ever since, providing a memorable experience for those unable to travel to Washington. It includes the names of the 58,318 men and women who sacrificed their lives in the Vietnam War.

Kristin Houchins, Communications and Marketing Manager for Mayor Dennis Wright's office, says the city has been steadily working for a year and a half to bring the Moving Wall to Livonia. Planning and organizing each detail are intense, she says. Part of Houchins' job is to organize volunteers for the event.

"I'm amazed at how many people just want to be there, want to volunteer, they want to be involved," she says. "A lot of our volunteers are veterans." She adds that so many are honored to be able to help.

A motorcycle escort will accompany the Moving Wall from Greenmead Historical Park, through the city, and to its destination at Ford Field Thursday morning. Also included for the length of the display will be evening ceremonies, a museum, living encampments, military vehicles, and a USO-style show on Friday and Saturday evening featuring a Bob Hope impersonator.

A computerized look-up assistance will be available as well, to help find a name on the wall. For those who wish for a quieter experience with fewer crowds, Houchins recommends planning your visit early in the morning or late in the evening. A volunteer security guard will be on hand around the clock. Houchins says she hopes people go away with a greater understanding of the Wall and the sacrifice made by American men and women. 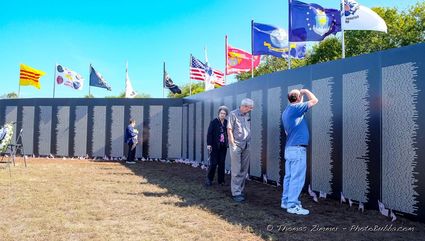 Houchins adds that the city, with the help of volunteers, hopes to read each name on the Wall aloud over the course of the display. "We're trying to keep that area very solemn and dignified," she says of the display area. "This is so personal to people, and so meaningful, and I just think it's going to be a very wonderful event for people to attend and be a part of."

The city also requests no dogs or cell phone use near the Wall. There will be no charge to visit. More volunteers are needed and if you would like to volunteer for this event, call Livonia City Hall at 734-466-2201. Ford Field is located at the corner of Farmington Road and Lyndon, north of I-96 in Livonia. Find out more about the Moving Wall at http://www.themovingwall.org