Jovan Olaifoye has gone from Ecorse to Grand Rapids, and North Carolina to Canada. Yet he never left home.

"Virtually everywhere I've gone, I met some great people that are like family to this day," said the new Ecorse football coach. "They were always welcoming."

The 2005 Ecorse graduate has retired from a football career that saw him become one of the most heralded players in Canadian Football League history to take the reins of his alma mater-and give back.

"It's actually a dream come true," Olaifoye said. I could have played a couple more years, but the opportunity to give back to my alma mater and community was too good to pass up. It's not about the money. It's about these kids. Helping them get to college and show them that if you have a goal and you want to achieve it, with support, you can."

Olafioye knows, because he's been exactly in their shoes. His ties to the community run so deep, he even said that there were teachers at Ecorse High School that taught his mother. His father is a physician in the area.

The homey feeling didn't change after he signed with North Carolina Central University after a year at Grand Rapids Community College, where he helped them to a junior college national championship game appearance.

"So many great people, strong black men and women giving back to their community was very heartwarming," Olaifoye said. "Being taught from black instructors, seeing people of my complexion do well for themselves, and expecting you to do well really pushes you."

After playing at North Carolina Central and aiding them to a Division II black college football national championship, Olafioye went undrafted in the 2010 NFL Draft. He joined the Lions training camp that year, but was released.

While readying himself to workout for other NFL teams, his agent alerted him to a CFL tryout in Miami.

"The general manager and head coach (of the British Columbia Lions) were there, they worked me out and asked their offensive line coach to work me out," he said. "I sent some film, and two weeks later I had a contract."

That initial contract led to an eight-year career with the Lions and Montreal Alouettes where he was named a CFL All-Star six times and played for the Grey Cup twice, winning once. It was also where he discovered his love for coaching.

"I always helped out at the practice facility and worked with the kids camps (in Vancouver)," Olafioye said. "I had always worked out kids on the side, and mentored kids-all for free."

Even though he enjoyed success in professional football, he wants the kids to understand that only a select few may make it.

"It's only a small percentage that make it. The biggest thing is getting your education and getting that piece of paper," Olafioye said. "The odds are already against you. Use football to get you to where you need to go." 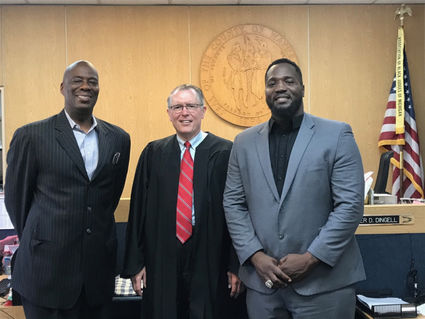 And if the early indications of how his Red Raider team are accurate, they could go far.

"I see a lot of positive things. There's a lot of athletes, always have been, and now there's someone there to guide them the right way," he said."I'm bringing in a lot of stuff that the kids ain't used to. Tutors, support, etc. Hopefully, we can bring Ecorse together as a district and as a community."

He is excited for what the upcoming 2019 season can hold.

"We've been getting great support from our athletic director (Keith) Stephens, Principal (Michael) Barclay, and our superintendent Dr. (Josha) Talison," he said."If the kids can buy in and accept the coaching, we will have a successful season. We will surprise a lot of people, not just on the field but in the community."