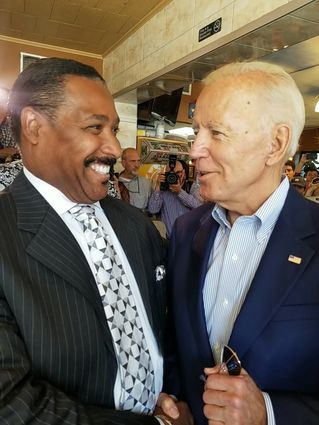 Curtis Williams is a simple man of God, but his character and credentials helps to understand him on a deeper level. Curtis Williams is an experienced business owner who earned the title of Reverend, Pastor, and Doctor. The native Detroiter finished his high school education at Highland Park in 1975. His marriage to Ecorse native Joyce Turner (Williams) is what brought him Downriver.

Helping others through Ministry is what Reverend Williams loves to do. He takes pride in how his businesses are ran. Through his Trinity Chapels and Stinson funeral services he has the opportunity to reach families in a special way. The parlors, services, and people under his care have a reputation for quality.

Behind the nice suits and smile of Reverend Williams, sits an educated and celebrated man. Throughout his lifetime he's earned over two hundred and fifty awards. Last year he received a Man Of Excellence Award. The excellence speaks for the way the Reverend carries himself and speaks to others. Reverend Williams has piled up over thirteen years of education. He has five different degrees from five different universities.

Reverend Curtis C Williams contributes his mother for his work ethic. He's bringing that same force down in the community. He encourages the community to take charge and assume the identity of ownership. He's doing his best, and hoping the community can follow suit.

Xavier Jones - Why is the funeral business so important?

Reverend Curtis C Williams - In Ministry you have to love and be understanding of others. That's a Ministry in its own right. A ministry that engages and comforts people when they're in a time of need. The funeral Ministry is where you have to enter the others lives with the right balance of sympathy and empathy.

Reverend Curtis C Williams - Loving, caring, and understanding one another. Bringing the people to one spiritual and moral level. Ministry is doing for others without thinking about yourself.

Xavier Jones - Why did you retire as Pastor?

Reverend Curtis C Williams - You have to know when it's time for you to do something else. The zeal of it was wearing off, I needed to relocate that energy in other parts of the Ministry

Xavier Jones - Why are you so involved with organizations outside of the Ministry?

Reverend Curtis C Williams - I believe if you want to see a change you have to directly jump in and engage the problem.

Xavier Jones - What changes would you like to see in the community?

Reverend Curtis C Williams - I would like to see more of us step out on faith and pursue entreprenuralship As a community we don't own much. We have restaurants, churches and funeral homes. Through history we have not been producers, only consumers.