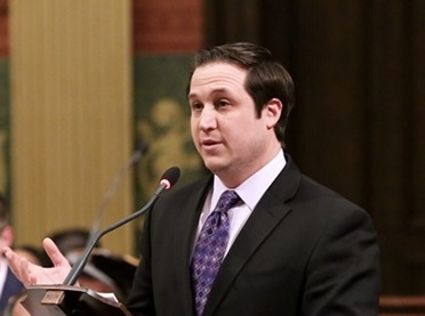 When news of a mass shooting breaks, Americans, glued to their televisions, shake their heads and wring their hands, asking, "What can be done?"

According to National Public Radio (NPR), 17 states currently have Extreme Risk Protection Orders (ERPO), also known as red flag laws in place, which allow for family members or law enforcement to petition a judge to remove firearms from the possession of someone deemed to be a risk to themselves or others, effectively preventing such tragedies.

In Michigan, ERPOs are not yet law. State Representative Robert Wittenberg (27th District) has been steadily working to change that. Wittenberg, who attended the anti-gun violence rally held downtown on August 18, is in his third term as state representative. During his first term, Wittenberg founded Michigan's Legislative Gun Violence Prevention Caucus. He also serves as chair of the caucus, which has been pushing for sensible solutions to the nation's gun violence crisis. "This is a problem that needs to be addressed," he says. "I think people are coming together because they are frustrated, because they are scared, and because they want to see something done."

This past February marks the third time Wittenberg has introduced ERPO Legislation. However, with Republicans controlling the Michigan Legislature, the proposed legislation is never brought up for a hearing and the proposed bill dies. Currently, the legislation, known as HB4283, is sitting in the Judiciary Committee.

Wittenberg explains how the ERPO would work: "If someone is a threat to themselves or someone else, we have some kind of mechanism to be able to temporarily seize their weapons and prohibit them from buying new weapons." HB 4283 allows for family members or law enforcement to petition the court, with evidence to back up their concern, to issue an ERPO, removing firearms from the possession of someone perceived to be a danger. The ERPO may even be issued immediately, and may be in effect for up to one year. "It is not indefinite, it is a finite period of time," says Wittenberg.

Wittenberg says his caucus has worked with Oakland County Sheriff Mike Bouchard to ensure penalties are in place in the event someone petitioned the court either frivolously or in order to harass someone. Additionally, those who are targeted for removal of their firearms will have the opportunity to be present at a hearing within 21 days of the filing of the petition. 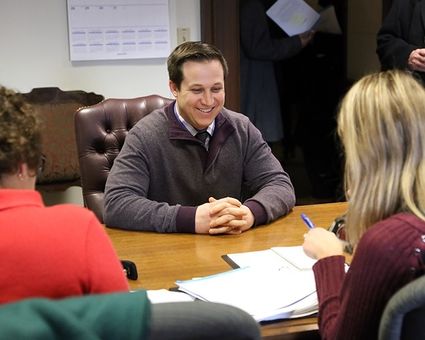 Rep. Wittenberg discusses legislation with colleagues in the state congress

The fact that lawmakers are not enacting some sort of legislation to address gun violence is a failure of leadership on the part of Republicans, both at the state and federal levels, says Wittenberg. "Gun owners and non-gun owners alike... any poll you look at, it's at least 90 percent approval, supportive of universal criminal background checks," he says. Wittenberg also says that polling data in Michigan from several months ago, before the recent tragedies in El Paso and Dayton, showed support for ERPO Legislation. "I think it was something over 60 percent of people were supportive of these so-called red flag laws, and I am guessing that number has only gone higher, and so I think it's past time that we start to move forward with some of these solutions."

No matter where you live, Wittenberg says we all want to move about in society and send our kids off to school without worrying about an active shooter incident. "Safety is an issue that transcends all the districts in the state," says Wittenberg. "We're not anti-gun; we're anti-gun violence, and I think that's something everyone can agree on." He adds the best thing residents can do is to contact their elected officials to let the know they want some safeguards in place to make sure guns are not getting into the wrong hands and that people who are a threat to themselves or others are not able to have guns.

If you want to know who represents you in Lansing and how to contact them, go to http://www.house,michigan.gov or http://www.senate.mi.gov.