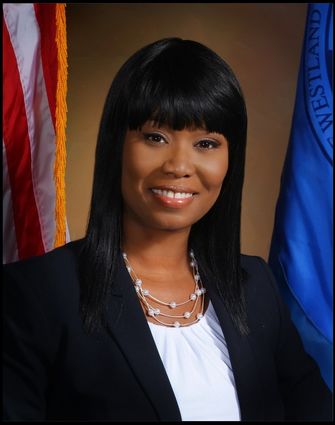 When Tasha Green was elected to Westland City Council in 2017, she vowed never to vote against the

voting on an issue.

to have city council members elected by districts is a good one. Rather than having all seven

councilpersons elected at-large, as is the current process, Green says election by districts would ensure

adequate and even representation of the city as a whole.

To gauge public opinion on the issue, Green sponsored a phone poll to determine whether Westland

residents would support the measure. The poll showed that 77 percent of residents support a districted

city council. She then conducted two online polls while reinforced those results, with the average of the

two polls showing 72 percent support for districted council elections. While she is optimistic about the

poll results, Green concedes that not everyone will be eager to see a change to the city's election process.

Districted city council elections are neither new nor unique. The nearby cities of Inkster, Wayne, and

Warren have districted city councils. "When a councilperson directly represents the interests of a smaller

segment of the population rather than 85,000 persons, it makes it much easier for them to have a more

personal relationship with residents in their district," says Green. "It also means that you have at least one

person on council who drives by the same pot hole in your neighborhood every day, who goes o the same

parks, who knows the condition of your neighborhood as personally as you do, and has every incentive to

part of the city. "Every neighborhood deserves to have representation on council and the ability to know

who their representative is and hold them accountable," she says.

city's population to reach. "I believe that there are residents in our city who would love to stand up and

represent our community but for the fear of not being able to fundraise, not being known," she adds. "I

like to see voting districts in Westland. She says residents are already reaching out and are interested in

supporting this initiative by helping to get signatures on petitions, which will be appearing shortly.