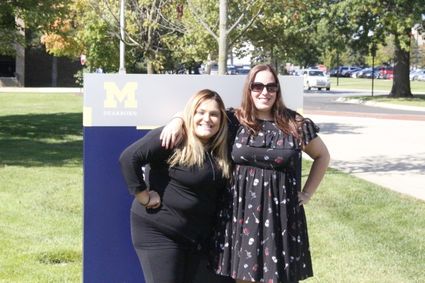 Students Elissa Gonzalez and Nadine Jones are organizing a suicide awareness event at the University of Michigan's Dearborn Campus.

DEARBORN - An inaugural event to raise awareness about suicide will be coming to the University of Michigan's Dearborn Campus on Wednesday, October 2. The event, called "Be the Light: An Evening of Suicide Awareness," will run from 5 to 8 p.m. and will be held at the Fairlane Center North, located at 19000 Hubbard Drive, east of Evergreen Road. The free event is open to everyone.

Co-organizer, Elissa Gonzalez says the event's goal is "To raise awareness and to give people tools to handle any kind of situation where they might be around someone that needs help, that might be thinking about suicide." Gonzales adds that having knowledge and resources at such a pivotal point can often save a life. In addition, the event hopes to give a platform for those grieving the loss of someone by suicide. A candlelight memorial will be part of the evening's activities. Ministers will be on hand for prayer and counseling.

"We're honoring, we're talking about lives, speaking about the signs, the causes, some of the struggles, we're just hoping to help," says Nadine Jones, who is also organizing the event. Often, when someone dies by suicide, those closest to them never knew anything was wrong, "Well, hopefully something like this is going to show you what it might look like, or if you do lose somebody, you can't have that guilt," she adds.

Both women, who are students at the university, agree that the stigma surrounding suicide can be overwhelming. "People are ashamed to talk about it," says Gonzalez. People who attempt suicide are often viewed by society as weak. Jones, who works with veterans, says that population loses more than 20 people each day to suicide.

Featured speakers for the event include Bob Bull with the veterans group Mission 22, Heather Barlow, with the South Redford School District, Chaplain Wade Natho with Warrior Family Ministries, and Joshua Mull, USMC Veteran and veterans advocate. Informational resources will be available, along with coloring books and games for stress relief, and light refreshments. The event has acquired two private rooms for those who become overwhelmed or would like to speak with someone in private.

The event is being presented by the Love A Michigan Vet Project, the Association of Women Veterans, the Public Relations Student Society of America, and several student organizations with the university. "Come," says Jones. "Come support, share, and don't make people feel ashamed. Let them know it's

okay if you have a problem and you're struggling, to talk to someone." Jones says the event will be a safe place to tell your experience. For more information, please go to http://[email protected] or http://www.facebook.com/LoveaM