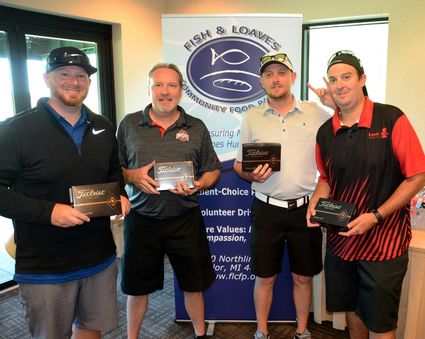 TAYLOR, – A tie-breaker determined the championship of the 11th annual Par for the Course fundraising golf outing at Taylor Meadows Golf Club.

The foursome of Brian Whitley, Michael Johnson, Matt Kowalczyk and Brian Welsh shot a 15-under-par 57 for the 18-hole scramble – the same score as the team of Chuck Stephenson, Scott Kemp, Shawn Lewis and Tom Downs.

Tournament officials compared the teams' scores in the four toughest holes and determined Whitley, Johnson, Kowalczyk and Welsh – all sponsored by Load One – were the winners.

The event was the 11th annual golf outing supporting the Fish & Loaves, a Taylor-based community food pantry that helps serve the nutritional needs of seven communities in the region.

The largest client-choice food pantry in the State of Michigan, Fish & Loaves relies on fundraising events, donations, food drives and volunteerism throughout the year to keep its shelves stocked. The golf outing is the pantry's largest fundraiser of the year.

The Load One team also took two of the three skins during the outing. The third skin was won by the team of Dustin Lent, Mark Dasche, Rob Hamyak and Mark Gaworecki.

"Closest to the Line" honors went to Lori Bondy, Jack Krygier and Jim Wright. "Closest to the Pin" recognition went to Susan Witek and Clayton Young.

Tied for third in the golf outing at 11-under par was the foursome of Paul O'Neil, Jason and Justin Yunk and Kenny Losay and the team of Drew Judge, Jake Reed and Ryan and Archie Gonzalez.

Matt Grant won the main raffle prize, a television. Carl Yunk won the 50/50 drawing, donating half of the money to Fish & Loaves. In a special unexpected gesture praised by Fish & Loaves, golfer Bob O'Neil matched a special "pass the bucket donation" of hundreds of dollars in honor of the family of Dick and Dot O'Neil.

Hollens said it takes more than $20,000 a month for the nonprofit organization to provide food to the needy residents in the its service area, which includes Allen Park, Brownstown, Dearborn Heights, Romulus, Southgate, Taylor and Woodhaven.

Fish & Loaves is a 501(c)3 nonprofit, volunteer-based food pantry. A faith-based, client-choice organization, Fish & Loaves provided emergency food assistance to individuals and families with compassion, respect, dignity and generosity. The pantry's mission is to ensure that "No One Goes Hungry."