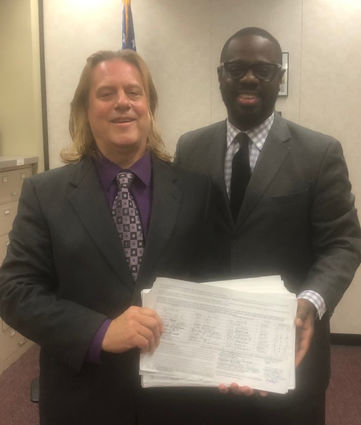 Detroit, MI – District Four will be the second of Detroit's seven districts to establish a Community Advisory Council (CAC). This is thanks to the effort of community college professor and local activist Scotty Boman who spent his summer collecting 1,570 signatures on a petition to create a Community Advisory Council for Detroit's fourth District. Only 1,141 signatures must be validated for the petitions to be approved.

Boman, filed the petitions on Tuesday October 1st following a brief news conference with Detroit's Fourth District Councilman Andre Spivey. Spivey and Boman met up at 9:30 AM to answer questions at the Coleman A. Young Center, then walked the petitions down to the City Clerk's office. According to the Detroit City Charter, "The purpose of these Councils is to improve citizen access to city government." And "The City Council member elected from the non at-large district in which a Community Advisory Council resides, or their designee, shall attend all official meetings of that Community Advisory Council." Spivey and Boman also addressed the topic in the citizen comment portion of today's Detroit City Council meeting.

Councilman Andre Spivey is a native Detroiter and Cass Tech grad who was first elected citywide in November 2009.

Boman commented, "In the course of circulating petitions to constituents I found that one of the most popular provisions was that a CAC may require that the City Council representative receive prior consultation from the Community Advisory Council on all issues which relate exclusively to that district. Another popular aspect of CAC's was their duty to assist groups, agencies, businesses and residents in community problem solving by meeting with them. In general people are looking for more transparency and to have a voice in the decision making process."

Boman said he has encountered objections, but those were largely based on misunderstandings. "Some people were concerned that creating an organization with seven office holders would strain the city's limited budget at a time when many retirees continue to suffer from lost benefits in the wake Detroit's bankruptcy. I wouldn't have undertaken this effort if it would add an additional burden on taxpayers. The Charter is clear on this. It says, 'Community Advisory Councils shall receive no appropriations from city funds, but may accept donations or grants in accordance with state, federal or local law.' Others thought that the CAC would replace their favorite community group, but they would simply be an additional avenue of communication, not a replacement for existing ones."

The members of the Fourth District Community Advisory Council will be chosen in the 2020 General election.