Series Feature: My Journey Toward Fitness 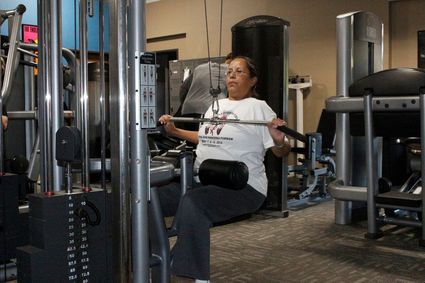 Renee Summers working it out on the gym equipment

As a young girl, my mother's nickname for me was Spider, in reference to my long, skinny legs. Heck, all of me was long and skinny in those days. When I entered young adulthood, it was a busy time of life with marriage, pregnancies, and housekeeping. Ideas such as exercise and fitness rarely entered my mind. As a young woman, I could eat just about anything and never gain an ounce. My weight hovered near 128 pounds.

Now, 35 years later, all that has changed. I am now mindful of the challenge of attaining a healthy weight and fit body. I would like to share my journey with you and how I am facing that challenge; how I went from skinny kid to chubby wife and news writer, and, ideally, back to a healthier version of myself.

I would also like to highlight the people assisting me on my journey. I have enlisted the assistance of a personal trainer, Tyler Canyock of Westfit Fitness and Nutrition Center in Westland. Westfit owner, Mike Toler is providing nutrition education and meal plans. Toler is confident they can help me lose a minimum of 20 pounds by the end of the year. The journey won't be easy, and I invite you along to witness it in all of its ups and downs. Read along as I recall how I came to be a person who realized it was time to takeweight loss seriously.

By 2004, my two children were out of the house and I was busy with my job at a local bakery. Unfortunately, I was tempted by the goodies around me and I had never been one to exercise the self-control muscle; I never needed to. But it began to appear that each trip to the clothing store resulted in my needing the next size up. I couldn't understand the weight gain and did not yet take it seriously.

I became frustrated when I eventually hit 150 pounds in 2012. I had quit working to attend college. It was a demanding time and items such as frozen pot pies, ground beef, processed lunch meats and carry-out became the usual dinner fare, a habit which proved extremely difficult to break over the next several years.

I thought that it would be easy to drop the weight. All I needed to do was cut down on what I was eating and exercise more, right? I added salads to the weekly menu. I used the bicycle more. On school days, I walked around campus. But my half-hearted efforts were not enough.

By the January 2019, the scale read 181 pounds. I was floored. How did this happen? I was exercising, I was eating healthy-or so I thought.

Diabetes was an ominous presence on my father's side of the family. In fact, father had died with it in 2015. Managing my weight had become a problem I could no longer ignore. I was already aware that in my dresser drawer were five pairs of blue jeans I could no longer button. I was unsure of what to do next. Everything I had tried to do on my own had failed. I knew I needed help.

I first became aware of Westfit at the Annual Fall Fitness Festival in Westland. I met Canyock, who was providing free body assessments. Why not? I thought. The assessment confirmed what I already believed: that I needed to lose weight and my health was at risk. 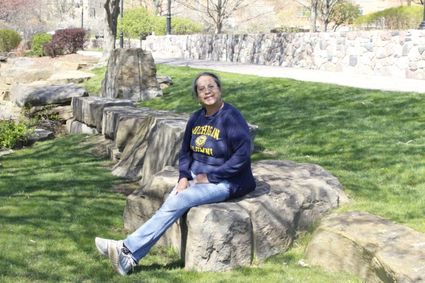 Telegram's Renee Summers earlier this summer, weighing 180 pounds, which she is working to shed.

My first weeks at Westfit are currently in progress. Toler is emphasizing the role of protein, carbohydrates, and healthy fats in weight loss. After reviewing my current eating habits, he graded those habits with a D. Food is fuel, he told me, adding, "You gotta fuel yourself with the good stuff." I am currently following a new eating plan he has devised for me; and it's not bad. It emphasizes lean protein, vegetables and whole-grain, healthy carbs.

Canyock is showing me how the fitness machines work to strengthen the various muscle groups. He is patient and understanding of my limited athletic ability. I am sore, but I am hopeful. I know I must say farewell to chili dogs and French fries as a regular lunch. I plan to fill in more of the story in a few weeks, reporting on the loss of pounds, what I'm learning, and ideally, new insight on nutrition and fitness.

Westfit Fitness and Nutrition Center is located at 1615 S. Wayne Road in Westland. They can be reached at 734-985-1958. Find their Facebook page at http://www.facebook.com/WESTFIT100/.