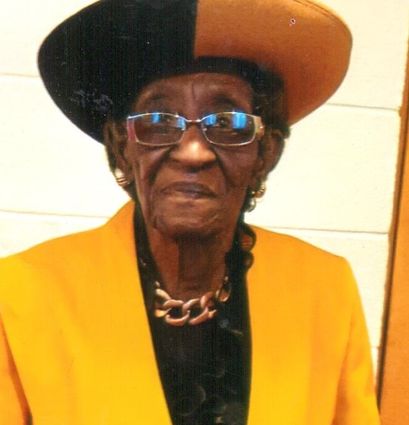 Gussie is the oldest of three children born to sharecroppers in Alabama. Her brother, Andy Cook and her sister, Anna Lou Cook are both deceased.

She speaks of the many days spent working in the fields. It was from this type of labor that she developed her work ethics. Working along with her parents, she was taught to work hard and to always do her best.

When the planting season, the tending to the crops and the harvesting season were over, she attended the Flint Hill Public School. Later she met and married Joe Rudd (deceased). Seeking better economic conditions, they moved to River Rouge, MI in the late 1940's. They later relocated to Ecorse. In 1968, she united in holy matrimony with James Garrett (deceased).

Her church life is very important to her. While growing up she was influenced and inspired by her mother, who was a Christian lady. Her mother loved the Lord, and stayed with the church. They would walk many miles each Sunday to attend church services. At an early age, Gussie united with the Concord Baptist Church, in Salem, Alabama. She united with Mt. Nebo Baptist Church after moving to Michigan. In 1970, she moved her membership to Mt. Zion Missionary Baptist Church, to worship with her family, under the leadership of Rev. J. B. Barlow. After forty nine years, she's still at Mt. Zion, under the leadership of Rev. Kevin B. Mack.

After joining, she didn't just sit in the pew, she began working with the Nurses' Guild and the Senior Usher Board. She still serves on both boards,, as a Nurse Emeritus and as an Usher Emeritus., attending functions and paying her dues.

Her first real job, where she received a paycheck, was at Bibb City Mill in Columbus, Georgia, making fabric and towels from cotton. She enjoyed sewing and making things. Working at Herb Cleaners, McIlwain Cleaners and Woods Cleaners, she did alterations. When time permitted she designed and made her own outfits.

She is very stylish. Each Sunday morning you see her sitting in service with her suit on, matching hat and shoes. She will be sitting there, early, because she does not want to be late. Even though she doesn't drive, she's always on time, thanks to her neighbor, Gwen Nellum and Makayla, her granddaughter, who picks her up and makes sure she gets there before service starts. After service is over, Andrea Fritz makes sure she gets back home, safe and secure.

Gussie is a friendly, kind, helpful person. She has a great sense of humor and a lot of, "mother wit." She doesn't mind dispensing advice. She is well respected at her church and in the neighborhood. She is called "Grand Ma" by many and "Miss Gussie" by others.

SINGERS: Over the years, she has enjoyed the melodious voice of many, but her favorites are, Mahalia Jackson, Aretha Franklin, Barry White and Luther Vandross. Now she enjoys watching TV, The News, The Steve Harvey Shows and Ellen DeGeneres.

FAVORITE SONG: "He Brought Me From a Mighty Long Way"

ADVICE: " Love one another and stop the killing"

CLOSE RELATIVES AND FRIENDS WHO KEEP CHECK ON HER:

FAVORITE SAYING: (When asked, "How are you doing?")

Her response is: "I'M KICKING, BUT NOT HIGH.