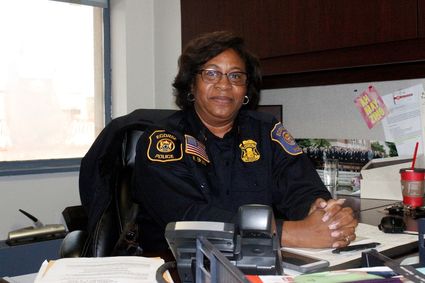 “Hey, Cop!” the boy would call. Ecorse Deputy Public Safety Director Narda Bruno recalls the young boy she had befriended years ago while making rounds in her patrol car. “Every time I rode past him, he’d say,’Hey, Cop!’ and I’d stop and talk to him,” she recalls. The boy later died, and Bruno is reminded of the pain of having lost a young friend.

Her career with the Ecorse Police Department began in 1989. Bruno began as a Telecommunications Clerk, working in the 911 call center and dispatching for the police and fire departments. She later entered the Schoolcraft College Police Academy in 1992, becoming the city’s second female police officer in the history of the department. “I was the only female, so it was a little challenging to be here with all the men,” she recalls, adding that the city’s first female officer had retired before Bruno entered the police academy. “Was I accepted? Sometimes not.” She does note that attitudes are changing regarding women working in a previously male-dominated profession.

A lifelong Ecorse resident, Bruno recalls when the community was more family-focused. “It’s little bit different,” she says. “Everybody’s working, where mom used to stay home, but everybody’s working now.” She says working parents can sometimes find it difficult to keep a family balanced and cohesive.

Bruno found motivation toward her career choice in her hometown as well. “In my neighborhood, there was one cop, and us outside playing, he would always speak very friendly, always spoke to us,” she says. She grew up knowing the police were there to help, not hassle. Bruno serves her community with a special concern for the issues which can affect women and children, and create victims out of the most vulnerable members of society.

A wife and mother of three, she is also a lifelong learner. Bruno has set a valuable example for her children. “Education is very important,” she says. “You have to keep educating yourself; laws change, you’ve got to stay up on all of that, you’ve got to keep it moving.” As she continued to strive for knowledge, she trained to become a detective, serving in that capacity for nearly 15 years before returning to the uniform division. Bruno is also a trained firefighter. 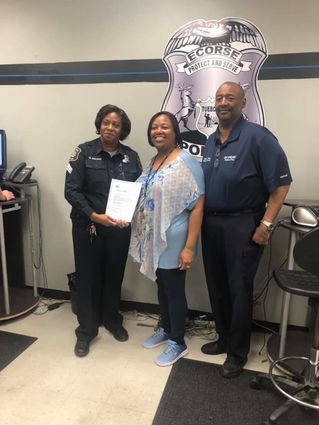 The feather in her cap may be her recent graduation from Eastern Michigan University’s School of Police Staff and Command. There she trained in police administration and executive leadership. “It was an awesome experience, it was very educational, a great group of officers from all over Michigan,” she says.