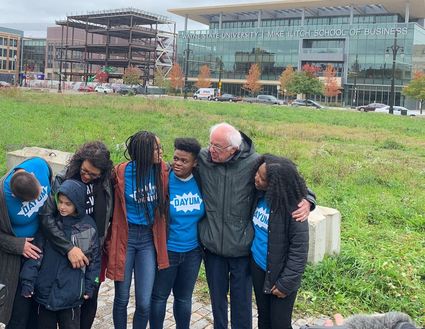 Bernie Sanders visited the City of Detroit on Sunday, but though the rally at Cass Technical High School featured Rockstar and Cass Tech Alum Jack White, it was not the sole focus of the visit. Congresswoman Rashida Tlaib from the 13th District, led Sanders through the duality of Detroit. The tour included the nearly billion dollar investment in Little Caesars Arena (LCA) to the area of City where people fight for necessities and rely on the help of the Brightmoor Connection Food Pantry for food.

while Detroiters fight for necessities, Detroiters such as high school youth and those that rely on the help of Brightmoor Connection Food Pantry for food.

Detroit Allied Youth Uniting Michigan (DAYUM) is an organization run by high school student activists. On Sunday, three students met with Sanders and Tlaib outside LCA because, although we want Detroit to have a revival, it's difficult to ignore that students are entering schools where drinking water has been shut off do to toxic levels of lead. That is their reality. In late August, Detroit schools were tested and dozens of schools were affected with lead in the water.

What is important to note is that there are social justice warriors fighting throughout Detroit. DAYUM is the youth face of a true revival, one where Detroiters have what they need before they venture into the LCA for a show.

Reflecting on the day's tour, Sanders had this to say, "I hear in this campaign the word 'socialism' a lot, well this is a perfect example of socialism for billionaires – massive amounts of subsidies and tax breaks, but for children, there's not enough money for decent education and for poor people there's not an ability to get clean drinking water. So what we got [is] socialism for billionaires and as Dr. Martin Luther King Jr. said, 'we got rugged individualism for the working families in this country'." 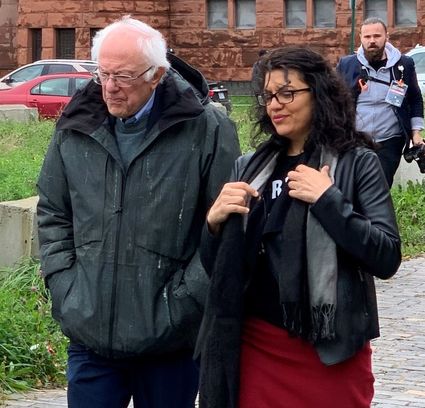 Whichever end of the political spectrum you lean towards, there is something to be said of the heart in Detroiters. Places like Brightmoor Connection and groups like DAYUM are fighting throughout the community regardless of who sits in the oval office. But is that enough? Tuesday, November 3, 2020 will mark a Presidential Election and with it, your chance to be a voice in your community. Find issues that move your community, listen in on the conversation being had on the matter, and take your place at the table.