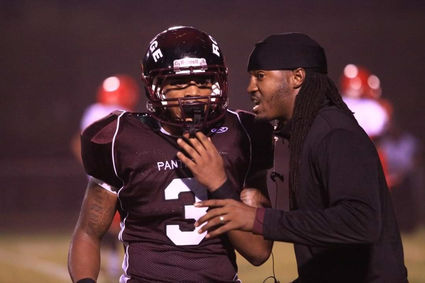 Football is a vital piece in the puzzle that's Corey Parker's life. It served as an outlet for him at St. Martin Deporres High School; where playing the safety position kept his mind and intentions clear. After high school, football gave Parker the opportunity to further his education at Eastern Michigan University. During his time in Ypsilanti; he was able to learn the game, travel the country, and develop skills that he didn't know will carry him to the future.

River Rouge was a city known for championships. The reputation held true for basketball and junior league football. Saturday morning Junior Panther fans herded to games in crowds; On Friday nights the stands of Panther Stadium would be nearly empty. With the youth program's success, it would make sense that the energy would roll over to the varsity program. Sadly this was not the case; top athletes from the junior league programs were outsourced and recruited to play for neighboring schools.

Add these factors, a heap of administrative, financial problems, and the constant action that goes through the City of River Rouge. Twenty six year old Corey Parker had a lot on his plate. With the purest intentions at heart, Parker walked through the doors prepared to make a change. It was love that guided Parker to Rouge initially. He was engaged to River Rouge alumni, Autumn Warren (Parker). Their interactions helped Corey find a head start in the city.

Autumn is the head coach for the cheerleaders, she organizes and works with parent groups, and she operates programs that help students find the right college home. Autumn and Corey have spent ten years establishing families inside, and outside the schoolhouse. The couple has three children; Seven year old Corey Jr, Four year old Avery, and three month Ashlynn. The entire Parker family is known for their hard work, friendless, and effortless energy.

Parker's entry year into the system was no piece of cake. Against all odds, the Panthers faced a 2-7 record for the 2009 season. A tough reality to face, but Parker and his staff vowed to break the mold. Changes came fast enough to make your head spin. That offseason he introduced players to strict, borderline insane regiment of weight training. Players got stronger, faster, developed a deeper sense of discipline, and adapted to new offensive system. That season the Panthers went 6-3. Breaking an unofficial playoff curse, in a game that was lost to Alan Park Cabrini.

The young guys stepped up for the next season. This team learned from the mistakes of the past, continued the brotherhood, and started to win games in the playoffs. Parker has reached playoff jurisdiction nine out of his ten years as a coach. In 2015 the Panthers finally made it to the MHSAA State championship game. But the young team fell short to an experienced Grand Rapids West Catholic team.

The Panthers haven't made it back to Ford Field yet, but are comfortable in their own skin. Winning a state championship is only an incentive to Rouge. The ultimate goal is to develop boys into world prepared young men. Ready them for college, qualify them to be fathers, husbands, and accountable men. Winning championships has become common for Parker. His trophy comes when students leave his influence better than when they came.

Parker wears a lot of hats. On top of being the team's head coach, his responsibilities are layered. He serves as Athletic Director, Dean Of Students, and varsity track coach. Even with the weight on his shoulders, the Panthers are currently holding on to a record of 10-1. River Rouge beat Mumford 53-0 in the first round of the MHSAA Division 3 playoffs. The Panthers will play Redford Thurston, Friday for round two.

Coach Corey Parker could not have done this alone. He credits everyone around him for his success. To superintendent Dr. Derrick Coleman, to the parent clubs, down to the cheerleaders. This was not done by Parker's hands alone. Coach would like to give special thanks and respect to his coaching staff.

The armada of skillful, dedicated men who share his best interest on and off the field. Parker knows his team inside and out, speaks highly of their talents, and will always put his foot forward as the leader of the Panther Football organization.

Xavier Jones - How are you feeling about these 10 years?

Coach Parker - It's been nothing but enjoyable, I honestly can't identify any of it as work. It's been a pleasure to develop so many young people and see them grow. I've been invited to weddings, baby showers, graduations. To see these young men evolve into men was my ultimate goal in building a program.

Xavier Jones - Does taking on so many roles make you feel any pressure?

Coach Parker - It's pressure to not lose balance, and push my family aside. That's easy to do when you're so busy. My family time is affected by everything, but both of my older kids are student athletes so they love coming out to the events. There's pressure to be successful and make this place more successful. It's tough. Pressure burst pipes, but I also believe it develops diamonds. I've worked hard and stepped up, and it shows. People are always excited about the things we have done for the school.

Xavier Jones - Some people say your presence saved the school, and the city. How do you feel about that?

Coach Parker - I would never be able to say that it's a hundred percent me. A lot of what happened, is simply an act of God. As much as I love the game of football, it's not going to change the financial outcomes of a district. But it did open eyes and mouths about what we have going on here. We have been getting more students enrolling for the River Rouge experience. We have problems like everyone else but there little compared to the past.

Xavier Jones - Did you see yourself in this position when you were in college? 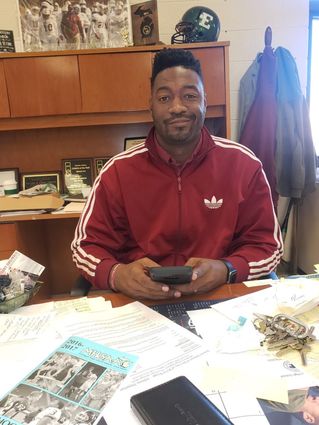 Coach Parker - I knew I had a passion for the game, and that I was a good player. My first thoughts were to make a career playing for the Candian Football League, but the franchise. The Ottawa Renegades, suspended their operations. My eyes opened once that happened! I needed to find a way to pay my bills and support my fiancé! I had to figure out what was next for us. I got picked up for a coaching job at U of D Jesuit, and learned how to love everything that comes with it. I didn't think it was going to happen this fast but, I wouldn't change my process for the world.

Xavier Jones - Is there anything different about you from when you first started to now?

Coach Parker - Besides from the dreadlocks, no I'm still the same Coach Parker.