Ground is Broken on the Fort Street Bridge Interpretive Park 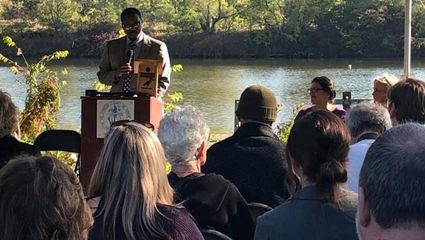 It was a bright sunny morning in early October, anda group of people gathered on the shore to hear Autumn Yancey of Lifeline Church Detroit perform a stirring rendition of "Wade in the Water." This was not Lake Michigan, or Lake Huron, or even the Detroit River-it was the Rouge River, at the foot of the Fort Street Bridge in Detroit. The event was both a commemoration and a celebration:the Friends of the Rouge (FOTR), a grassroots environmental organization dedicated to the river's revitalization, was commemorating the historic Rouge River fire of 1969, and the Fort-Rouge Gateway Coalition (FRoG) was breaking ground for the new Fort Street Bridge Interpretive Park.

It was hard to imagine that exactly fifty years earlier, those sparkling waters were filled with oily sludge that ignited into an apocalyptic blaze. On October 9, 1969,in the span of water between the Rouge Plant and Zug Island, sparks from an acetylene torch had ignited oil and wooden debris in the Rouge River, sending 50-ft. flames into the air.The burning river came tosymbolize the peak of societal indifference to pollution, and it wasn't only in Detroit--Cleveland's Cuyahoga River also caught on fire that year. At the time, pollution waslargely accepted as the cost of doing business, but the dramatic images of fire on water raised public consciousness and added force to an emergent environmental movement. According to Marie McCormick, executive director of Friends of the Rouge. "That historic Rouge fire became a catalyst for the transformation of the entire watershed,It drew local, regional and national attention and inspired transformational legislation, such as the Clean Water Act of 1972 led by the late Congressman John D. Dingell.Today, we celebrate the work that has been done to clean and restore the river that helps enhance communities throughout the entire watershed."

But the Rouge Fire was not the only historic event associated with the site. On March 7, 1932, during the Great Depression, thousands of unemployed workers organized a march from Detroit to the Ford Rouge Factory, in Dearborn. At the border of the two cities they were met with armed resistance from Ford's security force and Dearborn police. The strikers through frozen mud, but the other side fired bullets. Dozens were injured and five workers died. Alternatively known as the Ford Hunger March or the Ford Massacre, it also helped to sparked broader movement, leading to the creation of the United Auto Workers union and the eventual organization of the Ford Rouge plant.

"The historic Fort Street Bridge, central to the march, was decommissioned in 2013, and a new bridge has taken its place," said Shawn Pomaville-Size, executive director, MotorCities National Heritage Area. "A group of community partners called the Fort Rouge Gateway Partnership Committee or 'FRoG', have worked to ensure the history of the Hunger March, the significance of the former bridge and its importance to the region would be recognized within this new Fort Street Bridge Park. We see the new park as a first step in transforming a neglected urban space into an experiential gateway that interprets the history of labor, industry and the environment, while creating equitable access to green space." Plans for the park include a sculpture, kayak launch, boardwalk, rain garden, and a walking path symbolizing the renewed health and viability of the Rouge River and regional commitment to the environment.

Paul Draus, a professor at the University of Michigan-Dearborn and a board member at both FOTR and Downriver Delta CDC, was along on the kayak trip and spoke to a reporter from Channel 4, describing the park as an unlikely but necessary space of natural beauty in an area overburdened by industrial pollution: "The Iron Bell Trail will connect right here, the northern gateway of the Downriver Linked Greenway will be right here, and people will be able to come from the Joe Louis Greenway in Detroit and connect right here, at our park."

At the groundbreaking event, Representatives Debbie Dingell and Rashida Tlaib each addressed the crowd. "That fire was the catalyst for a lot of the major environmental legislation that passed in this country", said Mrs. Dingell, describing how her late husband John Dingell had led the effort to pass the Clean Water Act in spite of some local opposition. Reps. Dingell and Tlaib had paddled the river together the day before on a three-hour voyage organized by Friends of the Rouge and Riverside Kayak Connection in Wyandotte, and the experience clearly influenced their words.

Rep. Tlaib stated, "This is really very personal to me. I used to come across here all the time to get to Kemeny Center to play tennis when I was at Southwestern High School, and every time when I took the Dix Bridge and all these other bridges, and I knew it was the Rouge River but I didn't really ever fully understand it until yesterday, and now I'm never going to look it the same way."Mrs. Dingell said, "To be able to be out there [on the river], it was three hours, and I didn't think either of us ever thought we could have that much peace. That's what this is all about. We are the leaders in showing people how we preserve our natural resources. We are an urban area, and this is going to have a launch pad for kayaking so people can go in and appreciate the natural resources we have, and we have to remain committed."

The event concluded with a sing-along of Woody Guthrie's classic song "This Land is Your Land," led by Tony Paris, musician and lead attorney at the Sugar Law Center, followed by an official breaking of the ground involving students from Dearborn's Fordson High School and the attending dignitaries.

Downriver Delta CDC was a founding member of the FRoG coalition and will be the official custodian of the park once it is built. MotorCities National Heritage Area, the University of Michigan-Dearborn, City of Detroit, City of Dearborn, Marathon Petroleum Co. LP, Michigan Department of Transportation, United Auto Workers Local 600, Friends of the Rouge, Friends of the Detroit River, various neighborhood block groups, PEA Inc. and others collaborated to build this park. Construction began in late October and the park is expected to open in the spring of 2020.