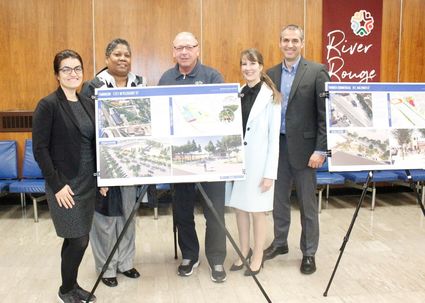 A Public Open House was held on Thursday, October 17, to address the status of the River Rouge and Southwest Detroit Brownfield Redevelopment Area-Wide Plan (AWP). The open house was held in the city council chambers at River Rouge City Hall. The event was presented by Wayne County and its consultant in the plan, ECT Environmental Consulting and Technology, Inc. Attendees included interested residents, community activists, and local government officials. Representatives from Wayne County, DTE Energy and the EPA were also on hand to answer any questions attendees had about the process.

John D'Adonna, an engineer with ECT, explained their role in the assessment and planning of five sites which were selected as a study area in River Rouge and Southwest Detroit: the DTE Power Plant Site, the former incinerator site on Marion Avenue, a vacant building at 8 East Haltiner Street, the Fabricon Warehouse site on Pleasant Street, and a former gas station on Fort Street in Detroit. Wayne County representative Wafa Dinaro explained that the project received a $600,000 grant from the Environmental Protection Agency (EPA) to study and evaluate the proposed sites.

D'Adonna said ECT was involved to provide consulting on the environmental aspects of the chosen properties as the sites contained possible contamination "We've developed this plan with a lot of input from you in the community," D'Adonna said. "This is our third and final meeting for this area-wide plan, but it doesn't mean it's the end of the story."

Ann Marie Kirby and Brad Strader with MKSK, an urban and planning firm, offered a PowerPoint presentation, summing up the process thus far and presenting potential ideas for redevelopment of the five proposed sites. Kirby reviewed two previous community meeting held over the past year and a half, in which planners talked to community members and listened to what they felt the community needed and wanted, and eventually presenting site locations, including why they were chosen, their present condition, and potential redevelopment options. "This is where you then provided your insight and your input to really let us know what your preferred alternatives were for those sites," Kirby said.

Kirby said of this final meeting held last month, "This is where we're showing you the final plan and we really want to get your feedback and your final input so we can move forward with implementation," she explained, emphasizing that all plans put forward were still only concept ideas and not hard plans already put in place and unchangeable.

The former incinerator site could be reused as a commercial development, Kirby said. The plans could also include recycling facility or even a park which would connect to the adjacent Belanger Park via a system of hiking trails. She then discussed potential redevelopment of the Fabricon Warehouse site, explaining recreational reuse was the expressed desire of community members. The site could potentially house an indoor athletic facility, volleyball courts, and a playground. "There's a lot of opportunities for this site," Kirby said.

Strader addressed the vacant building at Haltiner Street and Jefferson Avenue, saying, "This is an opportunity for redevelopment," He suggested a small retail shop or cafe would likely fit the site, perhaps adding outdoor space as well. The former gas stations site on Fort Street is a prime, ready to develop space, Strader explained, adding that the gas station itself had already been torn down. In response to community input, the suggested redevelopment plan for the site included a grocery or outdoor market, and outdoor use space, Strader said.

The DTE Power Plant site would propose both challenges and opportunities, as Strader explained that it was as of yet unsure when the plant would cease operations. With more than 100 acres, Strader suggested the site could be reused for light industrial, warehouse use, or as a data facility. The site also possesses the advantage of both port and rail access, along with the nearby interstate highway.

Following the presentation of potential redevelopment plans, a short question and answer session was held. As for the remaining process, D'Adonna told attendees, "I encourage you to stay tuned and stay engaged....we're interested in hearing your ideas."

Rev. Jerome Maclin of the New Mt. Hermon Baptist Church attended the open house and says he is beginning to feel optimistic about the proposed redevelopment. "I'd like to see the market, the fruit and vegetable market...we have no supermarkets," he said. "That's what we're missing here."