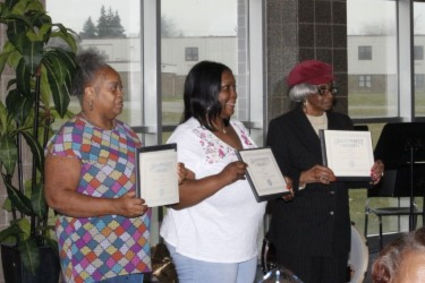 The Ecorse School District held a Grandparents Tea on Tuesday, December 3, from 9:30 to 11:00, to honor the grandparents of Ecorse students. The district-wide event was held at the Ecorse High School Media Center. The Grandparents Tea allowed students from Pre-K to 12th grade, and their grandparents, step-grandparents, or other family member to enjoy a time of celebration together. A breakfast buffet was part of the event along with music provided by students and the Ecorse High Jazz Band. Singer Yolonda Johnson captivated attendees with a vocal performance as well.

The event was organized by Grandport Academy's Assistant Principal, Sonya Williams. "This is the very first time they've ever done this in this district and there was a good turnout," she said. There were nearly 80 in attendance.

Selected students read poems honoring the role grandparents play in the family, and prizes were awarded for youngest grandparent, oldest grandparent and grandparent with the most grandchildren. The morning's event ended with several rounds of bingo being played, amidst much socialization and laughter between the grandparents. 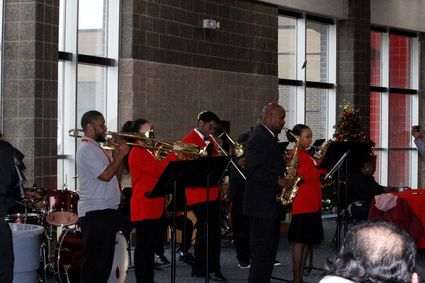 Ecorse Superintendent Josha Talison says the Grandparents Tea was an opportunity to show reverence to the grandparents in the community, many who serve a vital role in the schools. "Many of these individuals volunteer and assist in various capacities throughout the district," he said. "Most importantly, they all value the educational experiences their grandchildren receive daily within the district. It is our honor to acknowledge and praise them."

Williams says grandparents and older adults can be very important in children's' lives. She adds that children feel a sense of accomplishment when they know that people in their extended family and community care about their education. She said that having so many families participate in the

memorable event helps to reinforce the fact that "Ecorse is a close-knit family; you may walk in as a stranger, but you're not walking out as a stranger."