So Fraiche and So Clean 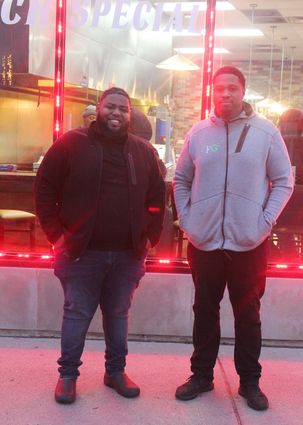 Steve Watkins and Darryl Folks outside of their baby.

What do you get when you combine fresh food, good recipes, great service, and a comfortable environment? Drop this location in the heart of River Rouge; and you got the Soo Fraiche Grill. Owned and operated by Chef Steve Watkins, and master entrepreneur Darryl Folks. So Fraiche Grill celebrated its grand opening August 1st, the door seems to have been flying off the hinges since the ribbon was cut.

Watkins was born and raised in Detroit. He spent his education in the Detroit Public School system. Folks is a born and raised resident of River Rouge. What initially brought the pair together was their obligations in the River Rouge school district. Steve is head of the culinary arts department, while Darryl is the president of River Rouge's school board. Underneath these jobs, both men have roles outside of the school. Chef Steve runs a catering company, SS&S Catering. Darryl manages multiple business and coaches for the River Rouge junior league football team.

Opening a restaurant has been on Chef's mind, but it was difficult for him to get the idea started on his own. Darryl had the information and advice needed to take off from the starting position. Each man had their own shoes to fill once the partnership became established. Folks brought his sharp business skills, while Watkins sits his knowledge of food, flavors, spices, and recipes to the table.

Once the business side of things became established, menu and restaurant etiquette had to be set. Folks and Watkins both agreed that the franchise player of the team will be the rice bowls. Rice bowls have the option of different meats, rice, and vegetables. The chicken sliders are the next menu item that turns heads. Soo Fraiche's menu doesn't stop there. The eatery is famous for its shawarma sandwiches, burgers, wings, handmade sauces, banana pudding, and lemonades. The food is served hot, fresh, and with a smile.

Food is fresh for two reasons. Steve and Darryl made the proper connections to ensure top quality food is handled, and the food doesn't sit on the shelves long enough to spoil.

A visit to Soo Fraiche Grill is more than a place to stop for lunch. It's a community monument that flourishes all of our senses and values. The first thing you hear when walking in to the clean, great smelling building is, "Welcome Fraiche Friend!" Customers are treated and greeted like close family from the second the door opens. Serving food isn't the deepest mission. Watkins and Folks have made it a priority to employ the neighborhood. Eighty percent of Soo Frache's staff are current or recent graduates of River Rouge High School. It's many of their first experience with money and responsibility.

Darryl and Steve hit the ground running; the pace has been set and the businessman hit a new wind with every turn. With each passing day, Soo Fraiche Grill is earning its own identity. The company is quickly expanding and networking. Soo Fraiche Grill caters, and is in the process of getting settled into a new location. The new location is in Detroit, it will offer a remixed menu and a different vibe.

The pair will continue to work around the monkey-wrenches of life and make the best of their business. In its five month stint, Soo Fraiche has already won a Best In Down River Community Award. The Soo Fraiche Grill will continue to feed and impress the community. As I am writing this article, a chicken slider meal with a side of rice sits next to my computer. My Editor, Gina Wilson Steward comes into the office and says, "Xavier! What are you cooking that smells good!"

Chef Steve Watkins - A restaurant that myself and Darryl came up with. Modeling the concept of rice bowls. We specialise in freshness, uniqueness and customer service quality. We represent freshness, we're just trying to be the next big thing.

Xavier Jones - Do you feel like your goals are coming to light?

Darryl Folks - I would say so, there's always a long way to go. But in this short period of time a lot has happened.

Xavier Jones - What have you two learned in these five months of business?

Darryl Folks - I learned to stay focused. Good or bad focus and everything will work itself out.

Xavier Jones - Do you have any anxieties on how to make the place better?

Chef Steve Watkins - No, I think we have executed everything and what's set in stone is set. We're coming up with new things everyday though. 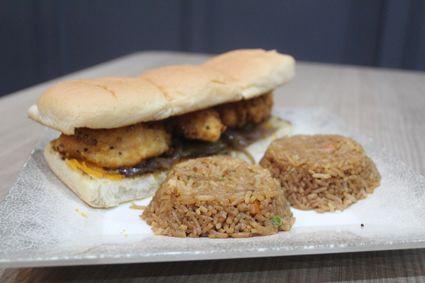 Xavier Jones - Are you feeling any pressure?

Chef Steve Watkins - Not pressure in the business, but the pressure in the community. I want to be able to reach out, grow and give more jobs to our kids that need them. It's pressure in students needing an opportunity and confining in you for one. Thirty-eight employees, if we don't come through that's thirty-eight mouths that can't get fed.

Thanks for being in the community.