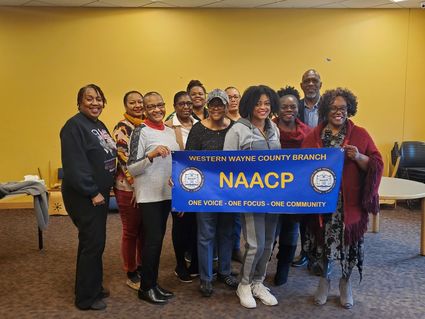 The Western Wayne County branch of the NAACP is one of the eight County branches in the State of Michigan. They were named the 2018 Branch of the Year by Michigan State Conference President Yvonne White during the Annual meeting. The Branch has been experiencing continous growth over the past four years.

One of their goals for 2019 was to build more partnerships with non-profit organizations, the faith based communities and local businesses as they work together to fight for the civil rights of people in the cities that they represent.

They are building on the next generation of leaders by reaching out to Millennials and youth. Their efforts are working as evident by the number of people under 35 years old that were in attendance at last years's Freedom Fund Dinner and the number of new Young Adult members. A special thanks to Beaumont Health for their continued support of the branch.

Also during the Freedom Fund Dinner, they named their 1st Champion of Faith winner. The inaugural winner was Christian Faith Ministries. They were recognized because they were the church that had the most increase in membership into the NAACP during our Champion of Faith Competition. Pastor John Hearn Jr. was presented the trophy by Michigan Lt. Governor Garlin Gilchrist during the Freedom Fund Dinner.

The Western Wayne County NAACP kicked off their Census 2020 Campaign – I Matter. Count Me In

during the final General Membership meeting in December. The informational speakers were;

Johnallison Westbrook II, from the Detroit Census office spoke on recruitment, LaGina Washington from Senator Betty Alexander's office spoke on the importance of everyone being counted and how the money will be used and Curtisene Barge (who worked on the Inkster 2010 Census) spoke about the work that is required to get a good count.

The Western Wayne County branch's president, Gina Wilson Steward said, "We are committed to have at least one member working with the Complete Count Coordinator in each city that we represent." The 'I Matter. Count Me In' Campaign is committed to partnering with the Faith Based Community, the Devine 9 and local non profits to increase the percentage of Hard To Count (HTC) residents counted this year.

On December 14th, the Michigan State Annual meeting had a record turnout as the members were getting prepared for 2020. 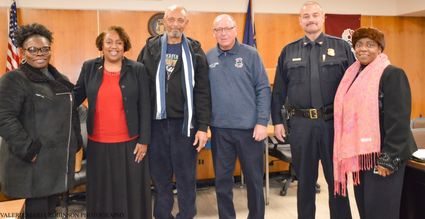 It was a festive and informative session that was held at Wayne County Community College – Downriver location in the City of Taylor. There were branches in attendance that hadn't been to any State meeting in a while. Members asked many questions and showed their enthusiasm for staying committed through 2020. The information shared by each branch showed that they had a busy year and the information was encouraging. The fellowship was amazing between the Youth and Adult Branches . The annual gift .raffle was a big hit as always. Over 25% of people in attendance were at their first State meeting, which demonstrates that many of the branches are growing. State Membership chair, Juanita Taylor, hosted the annual Coat Drive. Members brought in new and gently used coats that were donated to several homeless shelters.