USS Detroit Gives Back in Jamaica 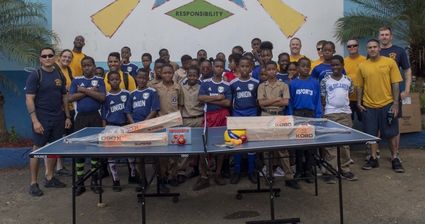 At Ocho Rios Primary School and New Providence School, in Kingston, Detroit Sailors delivered sporting equipment including cricket balls and bats, soccer equipment and a ping-pong table, and joined in a soccer game with the children.

"Through personal interactions, Sailors are able to form lasting bonds with the citizens, schools and organizations," said Cmdr. Jimmy Lawton, executive officer. "They're able to provide services, share our customs and embrace the local culture of the host nation."

"It was a humbling experience to be able to spend time with the children at the Providence School in Kingston," said Lt. j.g. Ashanti Kennedy. "It was a lot of fun and very enjoyable. Hopefully we'll have the opportunity to visit again and continue to be involved."

Lawton said that by working alongside the citizens of the host nation, Sailors better understand the challenges and adversities within the local community.

"This port visit was an opportunity to work in unison with the local community to build partnerships. Community relation projects such as these allow us to show that, even though we are from various parts of the world, we can come together with one common goal," Lawton said.

The Freedom-class littoral combat ship USS Detroit (LCS 7) departed its homeport of Mayport, Florida, for the U.S. Southern Command area of responsibility on its maiden deployment Oct. 31. While deployed to the U.S. Southern Command's area of responsibility, USS Detroit, with embarked helicopter and USCG law enforcement detachment, will support Joint Interagency Task Force South's mission, which includes counter-drug patrols and detection and monitoring of illicit traffic in the Caribbean and Eastern Pacific.