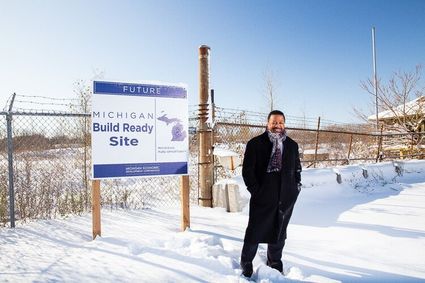 The City of Ecorse, like many downriver communities, has witnessed the boom and bust of the industrial era. But while the city has endured its share of struggles as heavy industry waned in the region, Ecorse is on the cusp of a new identity for the post-industrial era.

Today, the city is re-envisioning itself as "the place to be on the Detroit River", a hub for light industrial and logistics, quality neighborhoods, thriving commercial districts and riverfront recreation as its leaders partner with neighboring communities and regional organizations to capitalize on the region's many assets - including proximity to national and international transportation corridors, a solid workforce, and access to the Detroit River. A key aspect of the vision is repopulating the city, including planned middle-upper income housing along the riverfront at multiple locations.

That collaborative vision, according to Beth Colosimo, a senior project manager with the Michigan Economic Development Corporation (MEDC), is one of the reasons why Ecorse was one of 43 communities selected for the first round of Michigan Site Readiness grants. The city received $100,000 to help ready a city-owned 58-acre parcel on Mill Street in the city's southeast section for redevelopment. Formerly, a steel mill had operated on the site.

The Mill Street site was top of mind when veteran economic development expert Richard Marsh came on board as city manager in Ecorse two years ago, just before the city exited state receivership. Marsh knew that returning the parcel to productive use would be a critical step in sustaining and improving the city's finances, services, and overall recovery.

"Economic development is the lifeblood for the sustainability of communities," says Marsh. "Mill Street is a high priority development area because of access to the freeways, and to the rail. Plus it's a city-owned property, which gives us room to negotiate."

The parcel had lain vacant for 15 years, during which time the city had unsuccessfully tried to market it for redevelopment. The site faced several challenges, including contamination from the prior steel mill, utility limitations, and access restrictions. The grant will result in a site-specific master plan, with updated environmental review, a site access evaluation to identify improvements for trucks and traffic needs, a clear title, quantification of utility and infrastructure needs, concepts for site layout, and preferred land uses to market.

These types of challenges are common among many older industrial parcels across the state of Michigan, according to Colosimo, and they serve as an impediment to attracting new business to (and expanding existing business in) the state. That's why the MEDC developed its Michigan Site Readiness Site Improvement Program to help local governments and economic development agencies to chart a future course for properties that may have been deemed obsolete.

The MEDC began by identifying a set of "Michigan Site Readiness Vetted Sites Criteria" that helps guide communities and site owners along a path to getting properties ready for redevelopment. The criteria address issues like demonstrated intent to sell for economic development, clear title, surveys, infrastructure, community redevelopment readiness, and more. The MEDC then reached out to its partners in local communities across the state to help assemble a database of properties that either already did or were close to meeting these standards.

"We needed to have everybody working from the same basis of what would make it an appealing site to an industry looking for a location in their particular community," says Colosimo.

Those sites were uploaded into a state-created database called ZoomProspector that serves as a remote one-stop-shop for property searches. According to Colosimo, the idea is to serve up highly-vetted parcels to development consultants in a streamlined and accessible fashion.

"They could be at home or in their office or on an airplane, and they can look at this database to find some sites that would be of interest to them," she says. "So we were trying to build that inventory to make sure that developers could see if Michigan had a viable option for them."

According to McKenna city planning consultant Sally Hodges, focus on the new development is part of the vision of the City leadership that focuses on the assets of Ecorse as a whole, while partnering and coordinating with other downriver communities to multiply the city's influence in the State and region. Hodges' office recently worked with Ecorse and its neighbor, the city of River Rouge, on the West Jefferson Corridor Plan, which lays out a comprehensive vision for economic revitalization of the 3.5-mile north-south connector that unites the center of each community.

"There's a strong willingness on the part of many agencies, organizations and community interests to unify behind and support the city of Ecorse and make things happen," says Hodges. "In today's world, working together is the way to go – it increases the probability of success." 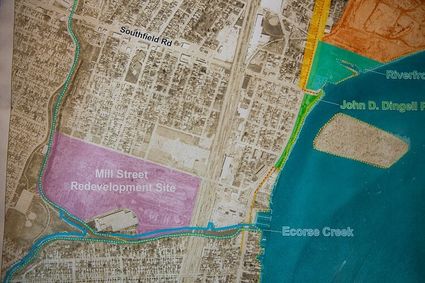 According to Marsh, the city, as the owner of the site, stands ready to work with the right developer and will bring to bear all of its resources, including its Site Readiness grant funding and incentives available through its Brownfield Redevelopment Authority.

Colosimo is watching the project with a close eye. She believes it may be a bellwether for the downriver communities.

"This could be a catalyst project for that entire downriver area," she says. "They're all working on putting together a collaborative team in that entire region to try to see what else they could be doing."

Stay tuned for future stories on the history and future development opportunities for the Mill Street site.