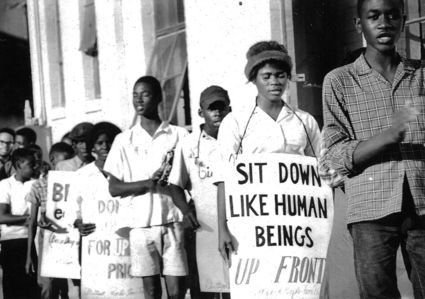 Ultimately, all mass student protests of the 1960s and thereafter owe their viability to the student-led Greensboro protests of 1960, including student black power activists and anti-war activists of the late 60s and 70s.Although its origins predate 1960, even one of the largest and most noteworthy national student organizations, Students for a Democratic Society (SDS), owe its resurgence and major elements of its effectiveness to the spark ignited by the Greensboro Four on February 1, 1960.

Even recent episodes of student activism exhibited in the Ferguson, Missouri protests of 2014-15, as well as the student protests led by black students at the University of Missouri in 2015, which ultimately led to the resignation of the chancellor, have attributes that correlate to the 1960 student movement.The student movement of 1960, ignited by the Greensboro Four, provided a blueprint for future students to build upon, perfect, and utilize in a variety of ways for a plethora of circumstances.

Most importantly, what happened in 1960 showed young people the power they possessed to address their grievances and ultimately bring about change on both local and national levels if they organized themselves and remained committed.

In addition to the typical traits that come along with youthfulness such as idealism and impatience, student success during the 1960 sit-ins and thereafter was directly affixed to two distinct assets possessed by students juxtaposed to their older adult activist counterparts.The first asset is condense demographics, as student-body populations were primarily located on campuses and/or nearby the colleges.

The fact that hundreds to thousands of students in a college town lived within a square mile of each other led to the expeditious mobilization of large numbers of people and efficient dissemination of information and strategy.

Although black churches proved to be invaluable throughout the Black Freedom Struggle from Reconstruction to the Civil Rights Movement, there was still no equivalent amongst the older black generation to the college campus' effectiveness as both a meeting place and as a domicile for housing and dispersing the shock troops of the movement.

The second major asset specific to students would be the relation between arrest and reprisal.At some of their demonstrations prior to 1960, older black activists strategically triggered their arrests for charges such as trespassing or loitering as a way to dramatize unjust treatment via media coverage and to pressure white officials to change discriminatory laws.

Once mobilized per the sit-ins however, student activists were able to invite and withstand incarceration for far longer periods of time and in extremely larger numbers. Students vastly elevated this critical strategy of the overall movement.During 1960 and beyond, the enormous numbers unleashed by black student activists put unyielding pressure on local law enforcement, political officials and jail facilities.In many cities like Greensboro, there were not enough jail cells for all of the students arrested, particularly since the students refused bail and chose to remain incarcerated.

This action severely drained local municipalities of money and resources, forcing local governmental, business and law officials to dramatically adjust policies and sometimes change discriminatory laws.Student activists were able to perfect this strategy because they could endure prolonged imprisonment without fear of major job or housing reprisal.

Comparably, many older activists, whose families depended on their incomes, could not sacrifice prolonged periods of incarceration, as it would threaten their livelihood.Furthermore, angry employers or landlords, who disapproved of their protest activities, could threaten to fire them or abruptly remove them from property they were renting.

Students were not confronted with the same ramifications of these economic, employment and housing reprisals, as the majority of them lived on campuses and perhaps had part-time, albeit replaceable, minimum wage jobs, often with no dependents.

For example, when Bennett College students, who were the heroines on the 1963 Greensboro protests, were arrested and refused bail during the 1963 sit-ins in Greensboro, their professors came to the jail facilities and gave them their classroom and homework assignments every week.This scenario personifies the symbiotic relationship between both generations in the fight against racism, as the professors showed their appreciation for the young people's unique and valiant position for the benefit of the entire race and future generations, yet not removing the students from their responsibilities and academic requirements.

Altogether, students endured countless hardships that included incarceration, verbal assaults and physical violence. Sometimes, attacks from white antagonists were compounded by disproportionate responses from law enforcement, as Portsmouth activist, Edward Rodman explained, "...the fire department, all of the police force and police dogs were mobilized. The police turned the dogs loose on the Negroes-but not all the whites."

Students also understood that they could pay the ultimate price for protesting against the status quo of racial inequality, as numerous activists were murdered throughout the Civil Rights era. Nevertheless, over 50,000 black students and sympathizers participated in the sit-ins of 1960.As historian Clayborne Carson highlighted, "Nonviolent tactics, particularly when accompanied by rationale based on Christian principles, offered black students...a sense of moral superiority, an emotional release through militancy, and a possibility of achieving desegregation."

A movement within a movement was born on February 1, 1960 and that movement evolved into its own distinct force by the middle of the decade. Soon after the sit-ins began, students realized their collective prowess, as student activism consistently helped define the decade of the 60s in forcing monumental political, legal and social changes throughout the nation.

Finally, the black student activists of the 1960 sit-ins did three important things, albeit unintentional: they helped lay the foundation for all collective student activism in the 60s and beyond, they played a legendary role in the larger African-American Freedom Movement that began as early as Africans' arrival to colonial America, and they cemented a valuable place in one of America's most significant traditions, the protest tradition, which has continuously defined and propelled our country since its inception.

Our society, and all post-1960 social movements, have undeniably benefited from the audacity of those four brave freshmen and their actions on February 1, 1960.