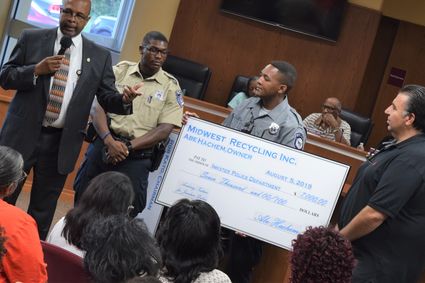 Ever wonder what giving back to community in a big way looks like? Look no further than the city of Inkster, where Midwest Recycling founder and CEO Abe Hachem and several other business owners in the city stepped up to support public safety. Hachem has generously provided for the city of Inkster to send two candidates to the fire academy and the police academy.

Inkster resident Terae Smith began training at Schoolcraft College Fire Academy in January. All expenses involved in the arduous 18-month program are being covered by Hachem. Likewise, Jourdain Dukes completed police academy training in December, courtesy of Hachem. Dukes is now engaged in field training on the job with the Inkster Police Department, along with fellow officer, Jarvis Whitlow. Officer Whitlow, an Inkster resident, was beneficiary of the financial support of a consortium of Inkster business owners.

Inkster Fire Chief Chuck Hubbard had been contemplating how to curb the high turnover rate of firefighters within the department when he hit upon the idea of recruiting Inkster residents to be trained as firefighters and work for the city. "They have more of a connection to the city because they live here,"says Hubbard. "In our department we only have one person that actually lives in the city, so I thought that if we could come up with a plan that would allow our local residents the opportunity to be a firefighter, that might benefit us." The only obstacle would be the cost.

"The thing about the fire service though, is you have to go through several steps to be certified, and they're expensive," Hubbard says, adding that the total cost for firefighter training includes EMT training and licensing, and runs nearly $14,000. "Most people can't afford to do that; the money's not just going to fall out of a tree."

Meanwhile at the police department, Midwest Recycling and several other businesses had stepped up to cover the cost of sending two qualified applicants to the police academy, enhancing that department's abilities.

Hubbard decided it couldn't hurt to ask, so he then approached local businesses and asked for their financial support for the fire department. Hachem was more than happy to assist. "When you get someone like Abe who says, 'Hey, look, I'll pay that fee,' that's a godsend," Hubbard says of the overwhelming expense of firefighter training. 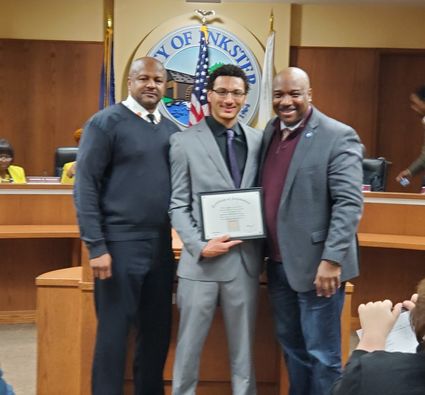 As for Hachem, he believes in helping when there is a need. "If you work in a community, and you're benefitting out of that community, you've got to give back to the community," he says. "There's nothing else better to do than to support the fire department and the police department because this is the least thing we could do for them for what they do for us...protect us and save us."

Officer Andrea Lebo, Community Relations Officer with the police department says "We appreciate the partnership with Mr. Hachem and Midwest Recycling. He has made commitments to continue this partnership and hopefully send more qualified candidates to the academy."

The generosity of community partners in Inkster provides additional public safety officers for the city, in addition to providing career opportunities many otherwise would not have.

"They have a vested interest here in the city and they are actually helping the financial side of the city by doing this," says Hubbard. "It's a great partnership."