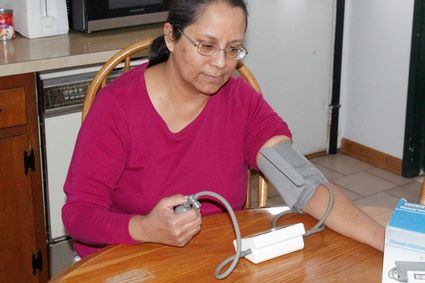 Using a blood pressure monitor at home like the Telegram's Renee Summers does, can help keep blood pressure under control. Many monitors cost less than fifteen dollars.

In our final installment of Spotlight on Health, we will focus on heart health, including hypertension, or high blood pressure.

When someone in the family has a heart attack, it's big news. Heart attacks are serious and can be fatal. They can also occur at any age. A heart attack happens when the blood flow that brings oxygen to the heart muscle is severely reduced or cut off completely. This happens when arteries providing blood to the heart become narrowed by a buildup of fat and cholesterol, known as plaque. When the heart is starved for oxygen, it becomes damaged and the result is a heart attack, or a myocardial infarction. The American Heart Association (AHA) says heart disease is the number one cause of death in Michigan.

Likewise, strokes are big news, and can often leave the patient either fully or partially disabled. A stroke occurs when a blood vessel carrying oxygen to the brain is either blocked by a clot or bursts. As a result, the brain is deprived of the blood and oxygen it needs, and brain cells begin to die. Stroke is the number 5 cause of death and a leading cause of disability in the United States, according to the American Stroke Association (ASA).

One notable risk factor underlines both conditions: hypertension, or high blood pressure. "Hypertension is the number one risk factor or indicator that would suggest someone will ultimately have a heart attack or stroke event," says Kristian Hurley with the American Heart Association's office in Southfield. Hurley says high blood pressure forces blood to rush through the veins and arteries, weakening them and risking rupture or breaking off of plaque in the arteries.

The AHA urges Americans to understand their risk factors for heart attack and stroke. While one cannot change their age, gender, or heredity-related factors, other risk factors can be modified or even eliminated. The AHA's website has an interactive online tool called My Life Check to help people assess their risk for heart attack or stroke. The tool uses seven risk factors that any person can easily change: manage lood pressure, control cholesterol, reduce blood sugar, get active, eat better, lose weight, and stop smoking. Yes, even high blood pressure is modifiable with lifestyle changes, and Hurley says many doctors often begin there before prescribing medication.

Additionally, the AHA has an online tracker called Check, Change, Control, or CCC, for people who would like assistance in keeping track of their blood pressure. The tracker can be set up to send text reminders to people to check their blood pressure on their own at home. "If they don't have an at-home monitor, when they're at a Walgreen's or CVS, or Sam's Club, or anyplace in the community that has a blood pressure device, it reminds them to take their blood pressure and then track it back into that program," says Hurley. "The program will tell you if your blood pressure is high." This can be a bonus for those unable to get to a health care provider on a regular basis. To use the online program go to http://www.ccctracker.com/AHA to set up an account.

Hurley says that preventing high blood pressure or any chronic health condition can begin as early as childhood. "It's never too early to be fostering healthy habits within families," she says. "Moms and dads should be looking at the foods they're feeding their kids, making sure they're getting enough fruits and vegetables, that they're not drinking a lot of added sugar in their diet, and that they're getting all the physical activity they need to be getting."