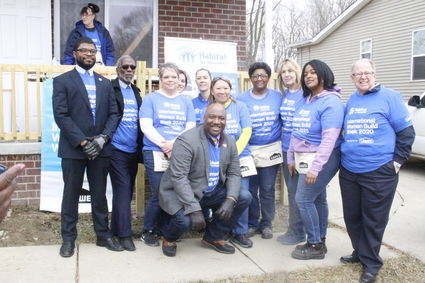 Elected officials came out to Inkster to support Habitat for Humanity's efforts in the city.

The chilly March breeze didn't deter the volunteers working to repurpose a home in Inkster on Wednesday, March 4. The volunteers were part of Habitat for Humanity's International Women Build Week 2020. Across the globe on that day, and in Inkster as well, women were using hammers, running power saws, and applying paint in an effort to provide housing for needy, qualified applicants.

In Inkster, nearly 60 volunteers converged on a house originally built in 2011 by Habitat for Humanity. Some came as part of community groups, others were Inkster residents. Amy Seibert is chairperson of Shiloh Women's Resource Network, anemployee-based organization which seeks to promote women's development and community service projects, and is affiliated withShiloh Industries of Plymouth. "Someone within our organization had done other types of projects with Habitat for Humanity," said Seibert. "I decided to pursue bringing a bunch of employees for the day here in Inkster to help work on the project today." Ten women in total came from Shiloh Women's Resource Network and Seibert adds, "It's about giving back to those that may need it."

Women Build Week is supported by Lowe's. The home improvement giant contributes more than $1.75 million to initiative each year. Lowe's also conducts how-to clinics at its stores to give women the skills needed for Habitat projects across the country.

"We have women from all walks of life, from various companies, but more importantly, from Lowe's, who sponsored this event," said Alice Dent, CEO of Habit for Humanity of Western Wayne County. "Women from around the world today are raising hammers, advocating for affordable housing."

The home on Dunning Street was a buzzing hub of activity. Projects for the house included replacing flooring, painting, and erecting a tool shed in the back yard. Upon completion, the refurbished home will be given to an honorably discharged veteran. 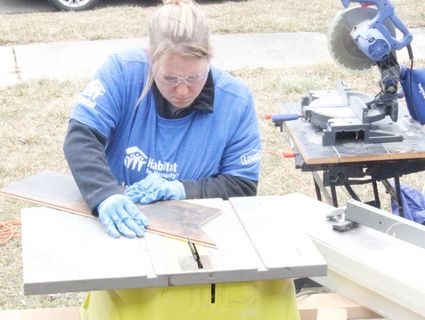 No special skills were necessary, just a willingness to work. "Some of the ladies have never put a floor down, so they have a foreman that's teaching as they go," explained Gennifer Williams, who served as liaison between the city ofInkster and Habitat for Humanity. "That's the awesome thing, that one, you're giving back to the community, making sure that someone will be able to have a home to move into, but also you're picking up some skills."

Dent says the volunteers were excited to be part of a global effort. "They're working very hard, they're all volunteers, they're not getting anything in return but the satisfaction of knowing that we're building the community and helping a family that's in need."

For more information on Habitat for Humanity, contact the local office at http://www.habitatwwc.org