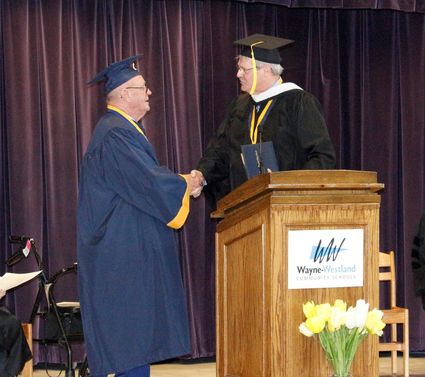 Avery Hall received his high school diploma at Wayne Memorial High School--67 years after he left high school to join the Army and fight in the Korean War.

In 1953, at the age of 17, Avery Hall left his home in Wayne, dropping out of high school to enlist in the U.S. Army and serve in the Korean War. He never had the opportunity to walk across the stage at Wayne Memorial High School and receive his high school diploma.

Hall did go on to serve 20 years in the military, eventually serving in Vietnam as well, and attaining the rank of sergeant first class. He married and he and his wife of 60 years, Aloisia, welcomed five children into their family.

"I cannot imagine how often you thought about the missed opportunity of earning your high school diploma," said Wayne Memorial High Principal, James Anderson, in addressing Hall during the ceremony. "I, along with the Wayne-Westland Community School District, are proud to be a part of helping you change a missed opportunity into a seized opportunity." 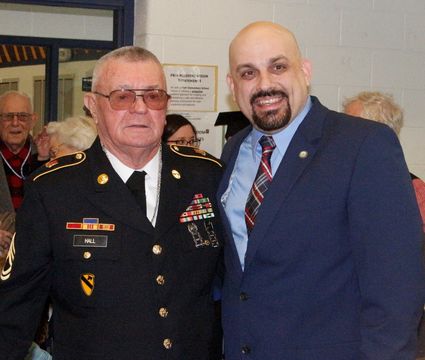 After receiving his diploma, and following much applause, Hall addressed the fourth and fifth grade students in attendance. "Stay in school, your education is very important," Hall told the students. "Mind your parents and your teachers. Your parents love you dearly, and your teachers love you dearly. They are her to give you a good education; they will guide you and teach you." Hall also thanked those in the district who worked hard to make the event possible.

A reception was held following the ceremony. Family members and a handful of former classmates of Hall were in attendance. Hall received honors from Westland City Council President James Hart, state Representative Kevin Coleman, and Wayne Mayor John Rhaesa presented Hall with the key to the city.

"I just don't have enough words for it," Hall said of the day's events. "It's something I've waited for a long time."

Hall is retired from the military and worked as a school custodian for 24 years. He now resides at the Lawton-Fort Sill Veterans Center in Oklahoma but says Wayne will always be home.