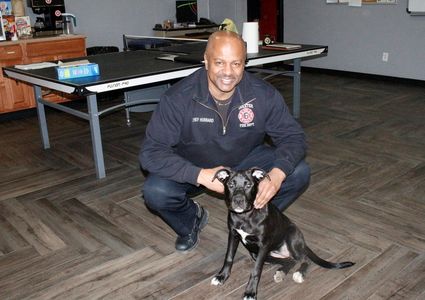 Working as a first responder is a stressful job. Increasingly, fire and police departments are realizing the therapeutic, calming effect an animal can have on distressed workers. At the Inkster Fire Department, Captain Ben Fergusons says the crew discovered firsthand just how having an animal around transformed the moods of everyone in the firehouse when one of the firefighters brought his new puppy to work for a few hours last year.

"They brought the dog up here with permission, and it was kind of nice," Ferguson recalls. "The dog was sitting with the guys in chairs and throwing the ball around, it was kind of neat." Ferguson put the idea of acquiring a dog for the Inkster Firehouse out for discussion at a December Fire Fighters Union Meeting. It was an instantly popular suggestion. With the city and Fire Chief Chuck Hubbard's approval, Ferguson contacted a friend who serves on the Michigan Humane Society's Executive Team about adopting a dog for the firehouse.

"He was very familiar with the process, so we met him at the Westland Humane Society one day," Ferguson says. "We looked at a couple dogs and kept coming back to Molly. Her personality, temperament, everything was right for us." They had chosen a black Labrador mix that had been picked up as a stray in Detroit, after having been hit by a truck. Her recovery completed, she had just recently been given the green light for adoption.

The Humane Society donated the adoption fee and Ferguson adds, "We ended up leaving in the firetruck that day with Molly."

The next step was choosing a name. The department set up an online poll for public to suggest a name and the department received over 300 responses. They eventually decided on Molly, in honor of Molly Williams, the first African American woman firefighter.

Historically, dogs have been a part of firehouses since the 1700s. In the days of horse-drawn fire carts, the dog of choice for most was the Dalmatian, as the breed possessed a loud bark which was helpful as they ran alongside and slightly ahead of the horses, their spotted coats keeping them focused, while warning pedestrians that the fire cart was coming down the road. 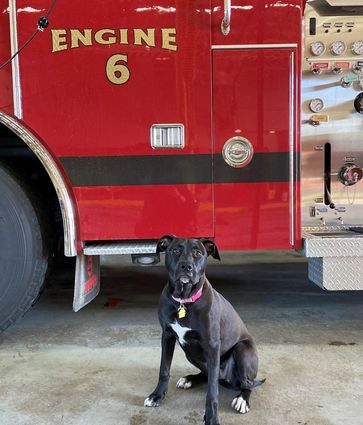 Molly was adopted from the Michigan Humane Society by the Inkster Fire Department last December.

In the modern era, dogs serve mainly as mascots in most fire departments. Ferguson says while nostalgia may be part of the reason, a dog's ability to be a companion and provide comfort is the bigger purpose. He says that prior to Molly's arrival, the crew at the firehouse did not have much in the way of a social cohesiveness; each man did his own thing, often away from the main living quarters, or dayroom. "She kind of brings everyone together throughout the day," Ferguson says, explaining that Molly's main area of residence is the dayroom. "Now it seems like our dayroom has become once again the focal point of our fire station because she's usually there and she's very interactive with us."

The four-legged fire house occupant with a wet nose has become the glue that holds the firefighters together, offering affection and a pet's unique ability to help destress while performing a demanding job.

"It's been very therapeutic, very soothing, relaxing," Ferguson says of having Molly as a resident of the Inkster Fire Department. "She's part of the family."