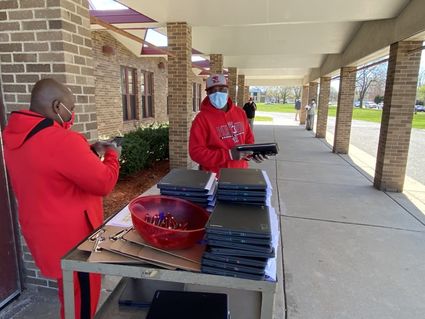 Ecorse Superintendent Dr. Josha Talison wears a facemask as he and others prepare to distribute Chromebooks to students to help with their learning process

Governor Whitmer's Executive Order closed all schools for the remainder of the school year, causing challenges for school districts across the state. In Ecorse, however, the closing has expedited an innovative plan that Superintendent Josha Talison has had in mind for the district. Beginning this fall, Ecorse Schools will be a One-to-One Computer District, providing Chromebooks to all students in the 2nd grade and older for use with schoolwork. "We were already planning on going to a one-to-one program earlier this year, but I think this situation has really moved it to the forefront," Talison says.

Talison says that teachers have been using Google Classroom to provide instruction during the shutdown but one problem they encountered was a lack of internet access for Ecorse families. "The teachers did a great job....however, we found out that even though we had this online platform, over 60 percent of our students didn't have resources to access it," he says. To address the issue, Talison and the school board are working with city leaders and Comcast to provide affordable internet access to Ecorse families through Comcast's Internet Essentials Program. The district has already passed out more than 200 Chromebooks for students to use during the school shutdown, but currently many families in the city lack internet access. 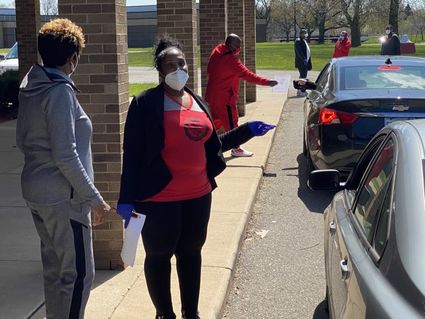 Talison envisions technology being an additional method of instruction in the district. The Chromebooks can be used in place of a textbook. "The students will be able to take the Chromebook back and forth, to home and school every day; it also prepares them for higher education, for that next step in the evolution of their educational careers," he says. "We're excited to call it an Ecorse 2.0; we're doing a reboot technically and figuratively. We're going from a more traditional paper and pencil to a more technologically-favored curriculum and delivery of services."

Roughly 1,000 students will be served by the One-to-One Computer District Program. Federal grant money will be used to purchase additional Chromebooks for student use and Talison adds that since the idea was already being considered, the district had already budgeted funds to be used for that purpose. "It's not going to be a cost issue at all," Talison says.

Talison adds that discussions with city leaders include transitioning the city, its services, and residents to a wireless platform. "If we can be a district that provides technology in the school and provide internet service out in the community, that would attract people to live in Ecorse and to attend our schools," he says. "This is an exciting time for the Ecorse Public Schools."