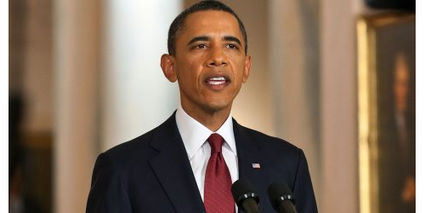 President Barack Obama delivers a statement in the East Room of the White House on the mission against Osama bin Laden, May 1, 2011. By Pete Souza, Official White House Photographer,

With unrestrained vitriol and the stunning lack of leadership emanating from the White House on an almost daily basis, the ever-rising popularity of former President Barack Obama is unmistakable.

The media and most of the American public hang on every word and watch every move Obama makes – many openly pining for the 44th president to "do something," "do anything," to provide some sense of normalcy and a renewed dignity to 1600 Pennsylvania Avenue.

"Overall, most liberals I know loved President Obama because he was eloquent and thoughtful. I think he's extremely popular right now because Trump has pretty much failed in every way possible – especially on the points where he said he could and would do things better than Obama did," New York resident Alicia Butler told NNPA Newswire.

"The inepter Trump becomes; the more people will forget what they didn't like about Obama. And for those of us who loved Obama, seeing Trump mess up ten times a day really drives our appreciation for 44 home even further," Butler stated.

Many others expressed similar sentiments.

He tightened up credit requirements to curtail predatory lending practices, which was the main reason the country went into the Great Recession, stated Kevin Darné, an author whose books have included "My Cat Won't Bark! (A Relationship Epiphany)."

"Obama got the Affordable Care Act passed which brought the number of 46.5 million un-insureds down to 27 million by 2016, and the stock market rebounded, and job growth increased monthly, and he also won the Nobel Peace Prize," Darné stated, adding that Obama repealed "Don't ask don't tell" in the military, supported federal recognition of same-sex marriage, and protected Dreamers from deportation.

"His quick response to Hurricane Sandy drew praise from Republican governors, Chris Christie of New Jersey and Bob McDonnell of Virginia, who killed Osama Bin Laden, the person responsible for the 9-11 attacks in 2001."

Darné also pointed out that Obama effectively managed the Ebola crisis. At the same time, Trump has only repeated his mantra of building a wall, gutting Obamacare, and handling the COVID-19 crisis less than stellar, he said.

"He routinely lies and blames the Obama administration for every issue that arises. The main goal of Donald Trump appears to be to dismantle every signature achievement Barack Obama had," Darné said of the impeached Trump.

Presumptive Democratic Presidential Nominee and former Obama Vice President Joe Biden have publicly stated that he would love to have former First Lady Michelle Obama as his running mate.

The "Committee to Draft Michelle Obama for VP" is working to build "substantial grassroots support for a potential Michelle Obama candidacy and help garner media attention for a vice-presidential nominee who has the power to beat Donald Trump," according to the group's press release.

"Ms. Obama, the most admired woman in America, will be a vital asset this November when Vice President Biden will face an uphill battle to combat the lies and deceit emanating from the White House," said the statement released Monday.

"Her credibility as a trusted leader and a strong symbol of unity within the Democratic Party would certainly help Democrats defeat Republicans up and down the ballot."

Tina Willis, a personal injury attorney at Tina Willis Law, said she cried when Obama left office. She said she didn't agree with every decision Obama made while in office, but she never doubted that he held the best of intentions for all Americans.

"He was smart and empathetic, surrounded himself with the best advisors and team members, and always did his absolute best to both bring people together and do the right thing for everyone in the country," Willis stated.

"I would say that Trump is so awful, on every level, increased my appreciation for Obama. But my feelings toward Trump didn't increase my admiration of Obama. I always thought he was the best president that I've seen during my lifetime. I really wish Michelle Obama would become the vice president, although I definitely don't blame her for not wanting to face all of the bad that comes with a high political office in this country."