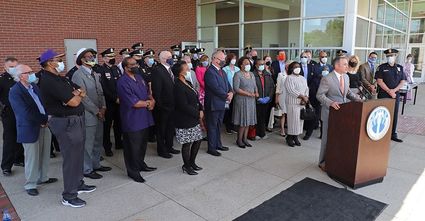 Wayne County region in light of ongoing protests around S.E. Michigan seeking new discussions and reform in our communities.

On Tuesday, June 16 at 11:00 a.m. in Westland City Hall, the new Partnership for Progress collaborative effort announced the first of three planned listening meetings in the CWW region.

The goal is for community members to be able to ask police and elected officials questions, share stories and offer ideas for solutions and change. The Listening Tour meetings are an extension of ongoing discussions that recently began between Western Wayne police chiefs and the Western Wayne County NAACP. "We realized that for far too long, many members of the community felt like they have not been heard by the elected officials and law enforcement in their communities. The recent killing of unarmed Black people and the resulting global protest says it is time to do something different," said Gina Wilson Steward,Western Wayne County NAACP President.

The City of Livonia will host the first listening engagement on Wednesday, June 24, from 6:00 – 7:30 P.M. at the Livonia Clarenceville High School auditorium, located at 20155 Middlebelt Rd, Livonia, MI 48152.

To accommodate social distancing required due to the ongoing COVID-19 pandemic, the event is limited to 100 people attending in-person, and PPE will be provided. Those wanting to attend in-person can access registration information at http://www.c-w-w.org. There are no restrictions on who can attend, but in order to ensure COVID-19 safety and compliance, you must be pre-registered.

For those who cannot attend, the events will be livestreamed via Facebook Live at http://www.facebook.com/conferenceofwesternwayne The meetings will include time for questions to encourage an all-encompassing conversation. Community members who register can submit proposed questions

and/or statements in advance via the C-W-W.org registration page.

The events will be moderated by Daicia Price, LMSW, a member of the Detroit Wayne County Crisis Intervention Team, which supports collaborative efforts to sustain more effective interactions between law enforcement and the communities they serve.

"The leadership of the Western Wayne County NAACP began our Conversations with Police Chiefs last week because we must continue to work to change policies so that Black people can live without the fear of being stopped, arrested or killed by police officers. The information shared between the Police Chiefs and the questions asked by the community proved that more conversations need to be had. We partnered with the Conference of Western Wayne to continue our Listening Tour. We believe that continuing to learn what happens when police officers interact with Black people will help us determine which changes police chiefs and elected officials can implement that will benefit the lives of Black people."

"The message we have consistently received from the organized protestors in the Western Wayne County region is that they need to be heard. As elected officials and police chiefs, we understand that necessity and we hear you. This is the time for open and honest discussion and communication that can facilitate

real change. The Partners for Progress Listening Tour will give community members the ability to ask the questions they need answered, to share their stories and to also offer ideas for solutions. We know that we need to give people the opportunity to be heard and we need to listen to them. Our intent with these tours is to create an environment in which all parties feel comfortable to express

their concerns, questions and ideas for change."

"We see this as an opportunity for both the Western Wayne County Police Chiefs and the community to learn from each other. Through these open dialog forums, the police chiefs will be able to gain a greater perspective from our communities of their specific concerns. While doing so, the community will have the opportunity to see and hear firsthand how many Western Wayne County Police Departments have already implemented the training, the policies and early warning systems that the community is asking for. Moving forward, the Listening Tour will give us an excellent opportunity to create the model of community partnership for the rest of the Nation to follow."

The Conference of Western Wayne is a group of 18 Western Wayne County communities that coordinates 911 services for its 700,000 residents and 360 square mile region. CWW also represents its residents by meeting monthly to discuss issues such as legislation, transportation, public safety, substance abuse prevention, community and economic development, employment and the

environmental health of the region.

The Western Wayne County NAACP represents citizens in the communities