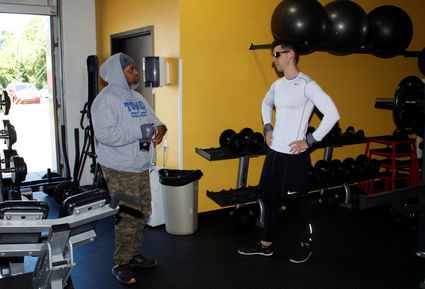 Westland Fitness and Nutrition Center held its Grand Re-Opening on Sunday, June 14. The exercise facility had been shuttered since March 16, when Governor Whitmer issued an executive order closing all indoor public gathering places such as restaurants, community centers, movie theaters, and gyms. The arrival of the COVID-19 pandemic and ensuing state shutdown has hurt thousands of businesses in the state, includingWestland Fitness and Nutrition Center, which had just celebrated its one-year anniversary in January.

Westland Fitness owner Mike Toler decided to open fully after being allowed by the governor's orders to open the outdoor weightlifting area of the gym.Toler says his business suffered during the state-wide shutdown. "I decided to take the next step and open up because I have to; being a small business owner, if I don't open my doors to the public, I 'm going to lose it," he says. "I put my whole life savings into this."

On Friday, a federal judge ordered that indoor gyms and fitness centers can reopen on June 25. His plan to open early may have given Toler an edge over the large corporate gyms that surround him like Crunch Fitness and Planet Fitness, which have hundreds of locations and thousands of members. "My gym's not tiny by any means, but it's got a better feel to it, it's more like a family atmosphere here," he says. "Corporate gyms, they don't know your name; I know everyone's name here in my gym, that's the way I want it, I want it to feel like a home." He has fewer than five employees and less than 300 members, all from Westland and surrounding communities. "A lot of businesses went under in this pandemic, so it's good to support the community."

Westland resident Jay attended the Grand Re-Opening and was applying for a gym membership. "I'm excited to be back in a gym," he says. This is a nice local gym, it's a lot bigger than I thought it was going to be."

Originally from California, Toler has been in Michigan 11 years and decided to follow his dream of opening his own gym in Westland. A bodybuilder in his youth, Toler eventually became certified as a personal trainer and aerobics instructor. He is also a certified nutritionist and physical therapist. He believes people want to get back to the gym after being shut up at home for three months. Exercise is a natural stress reliever and mood booster as well. "A healthy individual has less chance of getting sick, I believe," he says. "If you're healthy, you've got a good immune system, and you're working out, all that stuff helps."

To keep gym members safe, new safeguards are now in place says Toler. Everyone gets their temperature taken upon arrival, plenty of hand sanitizer is available, and spray bottles of disinfectant and towels are provided to each person using the gym equipment. Face masks are optional as they can interfere with proper breathing during strenuous exercise. The doors at Westland Fitness Center are open to allow plenty of fresh air to circulate through.

Garden City resident Cody was using his new membership on the day of the Grand Re-Opening. He says he is impressed with the gym and Toler. "It's awesome," he says. "He's very welcoming and invites anyone who wants to just get away from their house and come out and try and be active."

"People like to come to the gym; they like to come, they like the atmosphere," Toler says. Currently, he is only allowing up to 25 people into the gym at a time. He is also offering drop-in rates and does not require members to sign a contract, which will allow people to ease back into the routine of working out. For $10 you can use the equipment and work out for one day; $25 will get you a week's membership and $50 will get you a membership for one month. "I want the community to know to please be safe and cautious out there," Toler says. And come to WestFit, come to my gym and come work out."

Westland Fitness and Nutrition Center is located at 1615 S. Wayne Road in Westland. To reach the staff or for more information, call 734-895-3399. Also view their Facebook page at http://www.facebook.com/WESTFIT00.