Juneteenth In The Hood

Knowing Our History Empowers Us! 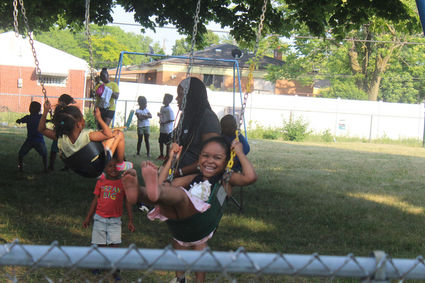 The Beechwood Center had all the equipment ready for top notch play time.

America has been locked in a constant state of transition and decay, since the first ship docked on the ports of Virginia in 1619. English and Spanish empires had their game plans locked down. The colonization process brought new laws, customs, and habits to the Western side of the world. This new system of life produced wealth, power, and a consistent source of supplies for some Americans; which most, had one thing in common. The economy was growing, and exports between countries were at an all time high. But this did not serve well for another group of Americans. This group as well had something in common.

Some came to America over the guise of servitude. That they would work their transportation fees, living expenses, and be offered a place in the new world. The theory was more successful for some than others. These customs, in America over a short period of time justified legally, religiously, emotionally, and morally. People were enslaved, pillaged, bartered, and stolen from the continent of Africa, and the black people of the islands close by. Or those identified by the governing powers as "negroes" or "others".

These guidelines were a way of American life when America freed itself from Britain in the late 1700s. Many slaves participated and died in the war. But as the Declaration of Independence was signed, the founding fathers did not forget to include that enslaved negroes were only 3/5ths of a white person in the same independent America.

For well into sixteen presidencies; the new independent America thrived off the work, and abuse of the slaves. President Abraham Lincoln didn't see black people as equals, and his opinion on slavery was never steady. Honest Abe felt the system of slavery wouldn't last in America's future. But he was in no need to pull a string in his presidency or lifetime.

America's pot was about to boil over. Lincoln's fickled stance clashed with the South's straight forward approach towards a States right to own slaves; which clashed with the North's views for the abolishment of slavery. When the president's hand was forced to be played, Lincoln was officially for the abolishment of slavery. This leading to the South's secession from America, and the formation of the Confederate States of America.

The South's Confederate Army fought against the North's Union Army in America's only recognized civil war. The conflict lasted about five years, ending with a Confederate loss and Lincoln's signing of the Emancipation Proclamation in 1963. Lincoln's Proclamation by far didn't end slavery. It recognized black participants in the Union military forces as Americans, and it opened the hearts and minds of many citizens. This gave the Union the leverage to capture the win.

The Union's victory liberated many blacks across the country. Once word got around the freed slaves did their best to find a moment of peace for themselves. Slavers did their best to keep the news off their fields. The biggest stick in the machine was the state of Texas. Texas was a fortified Confederate stronghold; not much union information or soldiers were allowed to get in and out.

June 19th 1865. The Union Army breaks through Texas, freeing the remaining slaves in the Lone Star State. This day is known as Juneteenth. Juneteenth is the oldest recognized American holiday honoring the abolishment of slavery. Juneteenth wasn't officially on the books until 1980.

From 1980 to 2020 information, and the history of Juneteenth have always leaked in. Finally, the floodgates have broken and the wealth of knowledge is pouring in. Some employers already have given Juneteenth the same privileges, and paid off time as other holidays, like Christmas. Companies are starting to open up and recognize black voices, and what Juenteenth means to them. It seems the world is trying to open up and celebrate the ending of an event so tragic.

This wasn't enough for Joshua Wheeler. The young man was too busy making new history, amongst a global pandemic and heightening racial tensions. Wheeler, and his organization Vision of the Youth teamed up with sponsors and contributors, like Plus Size Boss Babe, Soo Fraiche Grill, Clora Funeral Home, and many others. The grand affair he had in mind happened to be River Rouge's very first Juneteeth celebration.

The event was shared under the disclaimer of not being a rally or protest. But the celebrations from the Beechwood Center felt like a community revolt against America's limitless injustices. Joshua Wheeler, and the city of River Rouge offered the community a different form of protesting. The groovy demonstration was scheduled from 5pm to 9pm. But the streets were packed way before then.

It got so intense, Joshua never had the chance to change into his festive gear. However, his basketball shorts didn't stop him from moving like an experienced diplomat in a million dollar suit. Wheeler gritted his teeth, dug his heels into Beechwood Street, and gave it his best. His footsteps have transformed into giant leaps that are shaking up the state. News crews, and politicians from all over showed up. They blended in with the community to celebrate freedom, fun, and the education of the black people in America.

All forms of the community were represented. Old people, young people, teachers, artists, creators, and even law enforcement. Numerous officers from the River Rouge Police department participated in the event. They offered up an ear for the community in attempts to put a band aid on the horrors of American police. River Rouge Police Department wanted to show the city that it is there to protect them.

Joshua Wheeler thanks his team for the support and back up. With only two weeks to prepare they made it happen. He is extremely grateful for every member of the community who took their time to support him. He had 364 days since Friday to plan the next one, and he's already on the drawing board. Joshua put the marker down to answer some questions for me.

Xavier Jones - How do you feel about the Juneteenth celebration?

Joshua Wheeler - Overall, it was great to see the community link together the way it did. It came from the River Rouge Police Department. I appreciate Commissioners Tina Laginess and Karen Ward for their help. As well the support from Superientendent Derrick Coleman and School Board member Darryl Folks, and the dozens of district representatives that came out. It was good for the city to have the opportunity to fellowship at the Beechwood center. It's a monument in our community. It's time for us to preserve and revitalize it! There was no drama, no extras, just fun. I appreciate the community so much for that.

Xavier Jones - Out of all the buildings and spaces in River Rouge. Why did you choose the Beechwood center?

Joshua Wheeler - I think our community as a whole needed to celebrate Juneteenth on Beechwood. The city, and other organizations have the other spaces in River Rouge on lock. They are doing a great job at utilizing those facilities. For us, it was about remembering all the spaces we have available in the city. The Beechwood Center is a gem that has been passed down through generations. Because of what the center has always meant to us, it would have been an act of treason not to celebrate Juneteenth there.

Xavier Jones - Do you think the police had a chance to bond with the city?

Joshua Wheeler - Definitely! They showed a very supportive presence. The department is in the process of starting more programs for the community. Where each side can voice their needs and concerns. This was a great head start.

Xavier Jones - How did you make this happen so fast? 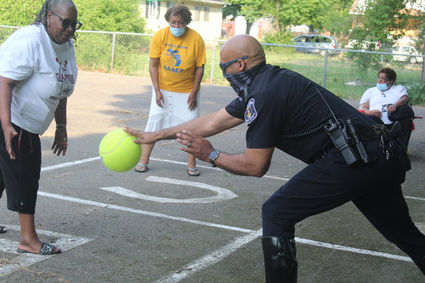 Joshua Wheeler - The Sponsors really stepped up, and the vendors showed out. Unlike 1860's, we had social media to get the word of Juneteeth out. We searched around, and no one had an event planned. Within the course of those two weeks everything snapped together like magic, and we got a turn out bigger than expected. In the end, we gained more sponsors and volunteers for next year.

Xavier Jones - What Does Juneteenth mean to you?

Joshua Wheeler - Honestly, I've been gaining knowledge on what it truly is over the last five years or so. I think most of us are still learning. I think it boils down to celebrating what our ancestors went through, and acknowledging the fact they survived passed it. In a country that values, parades, and makes a celebrity out of freedom. I think it's time to celebrate the freedom that most purely relates to us. It's time to honor Juneteenth as a culture, and make sure it doesn't get washed away in the history books again.