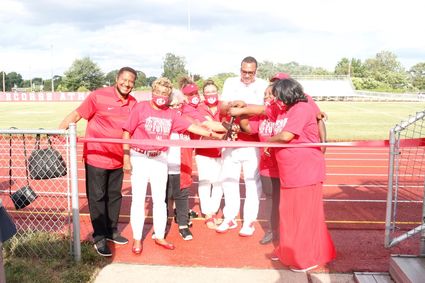 Ecorse High School was the site of the district's grand re-opening of its outdoor track facility on Saturday, July 11. The track had been resurfaced as part of the district's commitment to improvement in the schools. A pre-event mixer which included a light dinner was held for educational partners of the district and esteemed alumni. Masks were required and social distancing rules were in effect.

The district's track facility is named in honor of James Bibbs, an alumnus of Ecorse Schools, who returned as head track coach and physical education teacher in Ecorse beginning in 1964. Bibbs helped the school's track team win the Twin Valley Conference and state titles in 1967. Now residing in Lansing and more than 90 years old, Bibbs was unable to attend the event. "He's alive and well and he was very excited that we're rehabbing this facility," said Ecorse Schools Superintendent Dr. Josha Talison. Bibbs later went on to become the first African American coach at Michigan State University in 1968, retiring as Head Coach in 1995.

Improvements at the schools are ongoing, says Talison. Two years ago, the high school's athletic field received new lighting, funded through grants. He adds that the district is seeking grants to upgrade the football field and the field's scoreboard. In addition to grand money, donations from community partners and fundraising are helping to fund the improvements. "This is another piece of our puzzle of how we are rehabbing our district and making it the best it can be," said Talison. "In Ecorse, we're Ecorse strong, and we're here to make sure our kids always have the best."

Ecorse School Board Member Darren Johnson said of the school improvements, "It shows that the school board and the stakeholders are committed to excellence and we want the best for each and every student and for our community."

Ecorse High Alumni who were part of the school's track team were honored at the event as well. Nathaniel Elem graduated from Ecorse High School in 1952. "This is my high school," the former track star and city council member said. "The last few years they've really been improving things."

"Today's event is huge because we've made an investment to revitalize something that not only connects to the health of people today...this whole facility pays homage to the past, the history of Ecorse," said Ecorse Schools Athletic Director Keith Stephens. "Coach Jim Bibbs is a Hall of Famer at Michigan State

Following the ribbon cutting of the grand re-opening, Talison and Stephens led attendees on a Commemorative Unity Walk around one lap of the new track. Ecorse High's track facility will be open for the community's use. Following the event, Stephens said, "I am extremely pleased with today. The community's support is so huge, we can do anything we want by ourselves, but we'll never get far without each other; this community unity is going to cause a change and our youth are going to benefit from it." 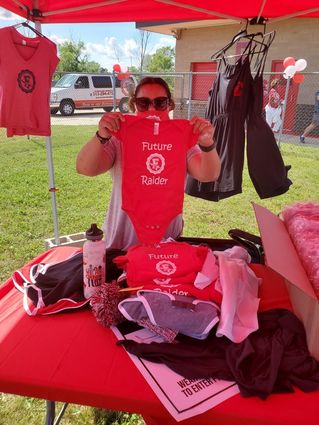