Youth Against Racism Marches Through Dearborn Heights and Inkster 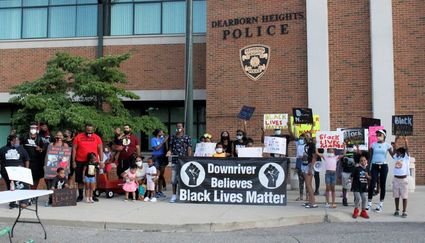 On Friday, July 24, youth from Detroit and several downriver communities participated in Youth Against Racism. The event was promoted as a peaceful protest for youth, providing a safe space for them to tell stories, share ideas, and support the notion that black lives matter. The Youth Against Racism rally took place at the Dearborn Heights Police Department's parking lot, where children and their parents gathered beginning at 5 p.m. to make their own signs to carry during the peaceful protest march to the Inkster Police Department. Event organizer Leslie Windless said that after organizing a similar community protest march in Dearborn last month, she was approached by some youngsters who expressed their confusion about racism they've experienced and asked if she would organize a march for children only. The result was the Youth Against Racism rally and march. "The problem of racism and systematic oppression, even police brutality, I think is different for children because they often don't have a voice," says Windless. "Having like-minded people in one place is a great way to show (them) that there are other people who believe what you believe and that the problem is real."

Former Detroiter and college student Byron Brooks co-organized the event with Windless. "Oftentimes, the youth's voice can be muffled or they're not given a voice or platform at all," he said. "This protest today is to allow them to utilize their voice when it comes to activism because they are not only our future, but they are our today."

After creating their own signs, the group of roughly 100 youth and parents organized and marched down Trowbridge, circled the Inkster Police Department and marched back to the Dearborn Heights Police Department along Michigan Avenue. They were escorted for safety by members of both police departments. Drivers along Michigan Avenue honked in support.

Dearborn Heights Mayor Dan Paletko attended the rally to show support for racial justice. "I'm fully supportive of human rights and I feel very strongly in my heart that if not everybody has freedom and all the civil liberties that come in the Constitution, then none of us have," he said. "Having all these young people here, that's great, because I think they can change the world much quicker than people my age; we tried and we made some improvements, but the young people are they key."

Following the 40-minute march, the rally continued with an address on responding to racism and bullying by Dearborn mental health therapist Yvette Chandler. A Kids Like Me presentation highlighted children giving brief presentations on young black youth throughout history who were victims of racism, such as Emmett Till, who was profiled by Alayah Windless, 9. Miss Windless said the event was a good way for the kids to talk about racism. "They get to learn how much people support them," she said. 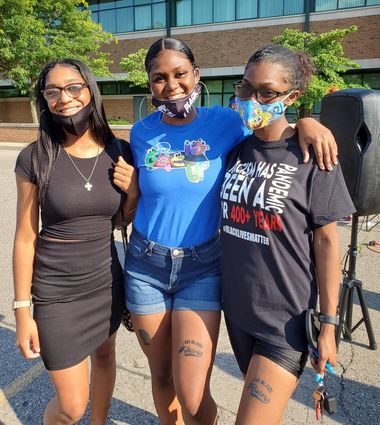 Supporting youth is the goal of Latanya Gater, candidate for Dearborn Heights School Board, who brought her family to the event. "I think it's especially important for kids to speak up because too often, adults make decisions for them," she said. Gater said it is important for adults to listen to the concerns of children and provide honest answers on sometimes sensitive topics.

The event was attended by a handful of local grassroots organizations including Accountability for Dearborn, Downriver Justice for George Floyd, and The Freedom Fighters of Michigan. These organizations not only participated but supported the event by providing bottled water, snacks, and poster board and paints for the children to make signs. In addition, the Dearborn Heights Public Library donated books for the children to take home.