NAACP LAUNCHES WEBSITE AHEAD OF 2020 VIRTUAL MARCH ON WASHINGTON 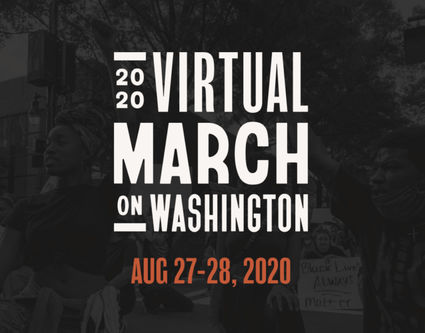 Special website for virtual march on 57th anniversary of "I Have a Dream" speech to advance a bold Black agenda; honor the legacy of John Lewis; mobilize the vote

BALTIMORE - Today, the NAACP officially launched a new special website (2020march.com) for the 2020 Virtual March on Washington, which is being organized in partnership with National Action Network and a coalition of civil rights partners-along with Martin Luther King, III and the families of Trayvon Martin, Eric Garner, Ahmaud Arbery, and Breonna Taylor. The website will provide thousands of supporters with a schedule of events, as well as tools to organize and register voters and volunteer ahead of the November elections. The virtual march - which will advance a bold National Black agenda - will take place on August 28 and 27, 2020 in partnership with the National Action Network, the National Coalition on Black Civic Participation, the National Urban League, the NAACP Legal Defense and Educational Fund, Inc., the Lawyers' Committee for Civil Rights Under Law, and The Leadership Conference.

The website outlines a series of events and activities to recommit to the dream Dr. Martin Luther King defined in the 1963 march, to call for police accountability and reform, and to mobilize voters ahead of the November elections. The #NonstopToNovember initiative will encourage supporters to mobilize to vote and demonstrate their collective power by marching for justice and demanding accountability.

Supporters are encouraged to sign up their fraternity, sorority, church, company, or organization for the march and its programming. Groups can sign up at 2020march.com/add-your-organization/ and will receive special opportunities to support the Virtual March.

Virtual and in-person programming will take place on the following dates, with more details and announcements coming soon at 2020march.com.

Convened by Rev. Al Sharpton and Martin Luther King III, the Commitment March will gather at the Lincoln Memorial in Washington D.C. to restore and recommit to the dream Dr. Martin Luther King, Jr. defined in 1963. The March will be streamed across multiple social media platforms.

The event will conclude with a night of virtual programming, including a major keynote address and musical performances by award-winning artists.