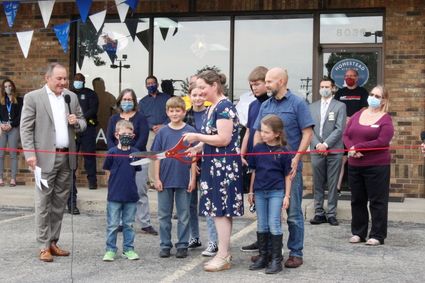 Last week, Governor Gretchen Whitmer declared September 20th to 26th to be Michigan Small Business Week. In Michigan, small businesses comprise over 98% of all businesses, and employ roughly half of the state's workers. In Westland, the small business model is alive and kicking as the city celebrated a grand opening and ribbon cutting ceremony at Homestead Kitchen on Tuesday, September 22.

The owner of Westland's newest baked goods shop, Catrina Staats, says she got her start in the baking business at home. A mother of six, Staats says she began baking and selling cakes out of her home, operating under Michigan's Cottage Food Law. "I kind of honed by skills at home, in different classes, and You Tube, and stuff like that...completely self-taught," she says. "I come from a long line of bakers." Hand-decorated cupcakes occupying the glass bake case at Homestead Kitchen and photos on the company's Facebook page make Staats' natural talent for cake creation evident. Working from home, she was able to acquire custom cake orders and build a customer following.

Then last December, Staats' husband presented her with an opportunity he heard about involving the long-shuttered former Mary Denning's Cake Shoppe on Ford Road. "I thought, that's crazy!" she recalls saying when he suggested she open her own bakery. "I know some people dream of having a bakery one day, but that's never been my dream."

Yet something persuaded her, and she recalls, "We ended up signing the lease on the bakery the same week the governor closed the state down." Staats' plans had been to build her business doing wedding and specialty cakes, but by April, such gatherings were deemed unlawful in Michigan. Undeterred, she began taking baked goods to local outdoor farmer's markets and when allowed, opened for customers on a carryout basis only.

While Homestead Kitchen has been quietly operating all along since April, Staats and her family thought now might be a good time to hold an official grand opening. On hand for the ribbon cutting ceremony were Staats' husband and children, Westland Mayor William Wild, members of the Westland Chamber of Commerce, including Chamber President Gretchen Heinicke, and dozens of loyal customers.

"Our local economy is built on small businesses," says Mayor Wild. "It's a great re-use of the building and we're just excited to be here today and I think as we start to do more and more ribbon-cuttings, I think it brings back that feeling that things are getting back to normal."

"When small businesses come in, our community prospers," says Heinicke. "We're very excited for Homestead Kitchen to be a part of the Westland Community."

Homestead Kitchen specializes in custom cakes and cupcakes, cookies, brownies, muffins, and scones. They also offer Keto and gluten-free options of their many baked goods. Coffee and tea are available as well. All baked goods are made from scratch and fresh fruits are used when in season. A dining area with free Wi-Fi is available, and can be rented for small events. Staats requests special orders be placed a minimum of two weeks in advance. For large orders, please call ahead. Hours of operation are Tuesday through Saturday 10 a.m. to 6 p.m.

"I think it's super important for us as a business to build relationships with our customers that come in, that they feel like they're immediately part of the family," she says. "Serving people has always been me...as a teacher I had the opportunity to serve people and now again through this- it's another opportunity to serve people, and it helps me express my creative side."