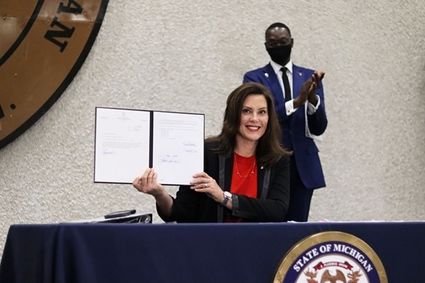 Governor Gretchen Whitmer shows the signed bill that will give people a new life by clearing items off their criminal record. Lt. Gov. Garlin Gilchrist in background with mask

DETROIT -- Today, Governor Gretchen Whitmer signed bipartisan House Bills 4980-4985 and 5120 reforming Michigan's criminal expungement laws making it easier for people who have committed certain felonies and misdemeanors to have their record expunged. Changes in the bills include allowing a person to set aside one or more marijuana offenses if the offense would not have been a crime if committed after December 6, 2018 when recreational marijuana use by adults became legal in...