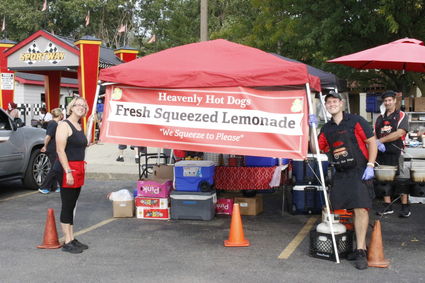 Heather and Tommy Ruark have been successfully operating the Heavenly Hot Dog stand since 2014.

Tommy Ruark has enjoyed cooking since he was a teenager. The 26-year old Westland resident says it has always been a hobby, so when some retiring neighbors who ran a mobile hot dog stand were planning on selling their food cart, the opportunity was too good to pass up. "I always enjoyed food anyways, and I just though running a food cart was cool, and I've expanded our menu a little bit and I just really enjoy the work," he says.

It was 2014 when Ruark along with his sister, Heather, purchased the hot dog cart from their neighbors, who had already established the business, Heavenly Hot Dogs, over the course of a decade. They kept the name and became co-owners, eventually finding success in the food cart industry; both possess business degrees. They acquired a second hot dog cart and work six or seven days each week. The Ruarks recently obtained a fryer and have also added fresh-squeezed lemonade to the menu, which includes bratwurst, Italian sausage, corn dogs, and French fries.

Previously, Tommy Ruark had taken classes in the culinary arts and had intended to obtain a degree in accounting before deciding instead to pursue business. Heather Ruark is a mother of three, holds a job as a paraprofessional at a Westland elementary school, and is currently enrolled in college. "I'm always busy," she says. "I'm not used to not being busy."

While they hold other jobs, both agree that Heavenly Hot Dogs is their main business and main focus for much of the year. Tommy handles inventory, shopping for supplies, organizing, and cleaning while Heather takes care of invoicing, placing orders, and hiring workers. "Thank God for her, she's a computer whiz,' says Tommy. "We balance each other out really well."

This year, the entire food cart/truck industry faced a challenge with summer events being cancelled due to COVID-19. But the Ruarks took their Heavenly Hot Dog cart to various locations throughout the area, partnering with local businesses and communities in order to conduct business. The pair have recently spent their Saturday afternoons selling delicious food items at Sportway of Westland. "This year it's been a little different with the pandemic," says Heather. "We were up at Gordon Food Service for a few months and now we've been here (at Sportway); we do a lot of catering, so we go pretty much anywhere." They recently joined the Metro Detroit Food Truck Tour, a consortium of mobile food vendors, where they set up to sell dinner at various subdivisions throughout Oakland, Wayne, and Macomb Counties during the week, a godsend for working families. Tommy says they were able to cater quite a few graduation parties early in the summer as well and in all, they've remained steadily busy. "It ended up being a really great year for business," says Tommy.

The pair have found a following of loyal customers over the years. "It's really overwhelming," says Tommy. "At Sportway, we have a lot of people that don't even go up to Sportway to go on the go-carts or do anything; they really come up there just to get food from us."

The season of selling dinners in the northern subdivisions will end in November. What does Heather Ruark like best about running a hot dog stand? "It's nice having more freedom on the job and picking and choosing what we want to do when we want to do it," she says. "We're really family-oriented, we love feeding people." 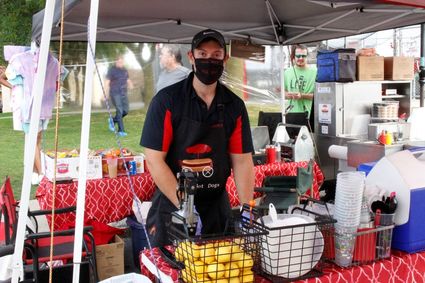 To find out more including where they will be located before the season winds down, see their Facebook page at http://www.facebook.com/heavenlyhotdogs.