Meet the Newest Face at the River Rouge Police Department

As a young girl, Rosa Holly planned on becoming a lawyer one day. The Ecorse High School graduate went on to attain an associate and bachelor's degree, both in the area of law. She later worked as a paralegal in a law firm. "That was my childhood dream-to be a lawyer," she recalls. But the rigorous education requirements involved in becoming a lawyer began to appear to be too large an achievement. She tried other jobs and landed at the River Rouge Police Department as a dispatcher in 2016, working under the late Police Chief Deborah Price. It was a good fit for Holly.

During her years as dispatcher, Holly observed the profession of law enforcement up close and eventually decided it was what she wanted to pursue. With encouragement from her co-workers, she entered the police academy this past January, graduating on July 6. Holly is currently finishing up her ride-along field training with the department. She says her previous education in law enhances her abilities as a police officer. "I've always admired the law side of my career; it's always been something I've been passionate about," she says.

Now on the job, Holly says it's a tough one, but she enjoys it. "It forces you to use your critical thinking, it forces you to make decisions on the fly," she says. "Nothing is routine about the job, you never do the same thing every day...you may go on the same type of calls, but it's never going to be handled the same." In addition to mental sharpness, she says humility and respect for others are essential, especially in these times when hostility toward law enforcement officers is often a familiar scene. 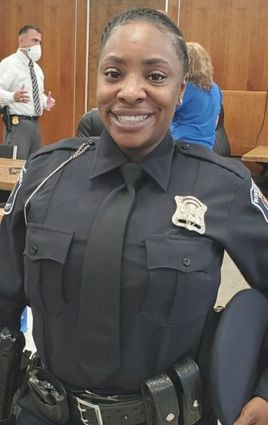 Holly is pleased to be able to serve her home community. She says familiar faces while working in this tight-knit community are a comforting part of her day. She finds satisfaction with being a role model for the youth around her, particularly young girls. "I want to continue to bridge the gap between the community and the police," she says. "A lot of the time, smaller kids, the younger generation, they have misconceptions about the police because of the news and video games; I would like to give them a broader outlook."

Since all new officers hired by the city of River Rouge are cross-trained as fire fighters, the next step for Holly is the fire academy, likely early next year.