Giving Back is his way of doing good for others 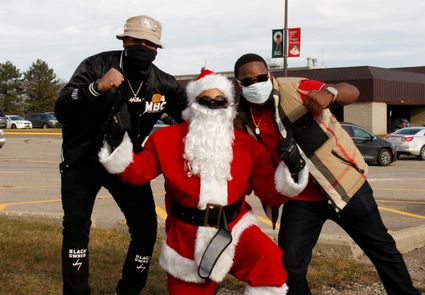 Jewell Jones, Santa Claus, and Kevin Harrington came together to give back to the community with a toy giveaway in Inkster

Kevin Harrington is a man on a mission. That mission is to do good for others. Harrington was released from prison in April after serving 17 ½ years for a crime he did not commit. His conviction was tossed and he was a free man. But he is not a bitter man, given his circumstances.

"I made a vow when God blessed me with my freedom back, I would do stuff like this," he said on December 23, when he joined with State Representative Jewell Jones and others from the community to host a toy drive and giveaway in Inkster for needy families. "I had never seen nothing like this in the community and it's something I wanted to do."

He reached out to Jones with the idea of a toy giveaway and both were pleasantly surprised to find the community willing to help out. The event was promoted via social media and more than 1,200 families signed up to participate, and Harrington says roughly 3,000 children received free toys, courtesy of roughly 50 community volunteers, including 20 local businesses who helped out as well by donating toys for the event. Due to COVID-19, the event was held drive-up style and 30 volunteers ran age-appropriate toys to each vehicle as they waited their turn. 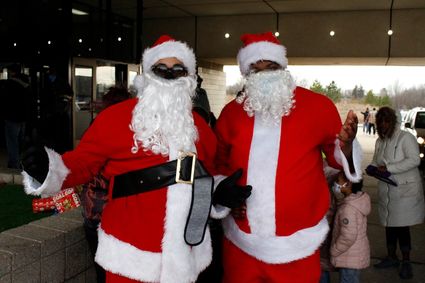 Santa Claus and his twin brother were part of the toy giveaway event in Inkster.

"Anything that I can do to support great movements like this, I'm always behind it, especially when it's back here at home," said Jones. "Just the interaction between us and the community, it's always a pleasure to have that kind of thing because so often we find that many people don't even know their neighbors next door...This is a positive event, we're excited, we're giving back."

Excited children, grateful parents, and even photos with Santa Claus were part of the afternoon's fun.

Both Jones and Harrington were pleased with the turnout and even the volunteers were finding pleasure in handing out toys. "They're having a good time because pushing it forward, making other people happy is always a good time," said Harrington.