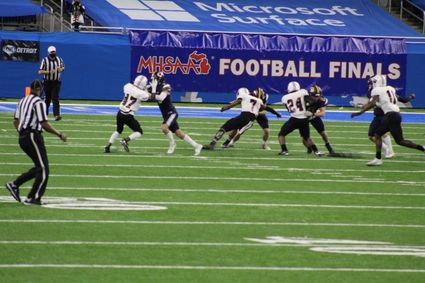 Everything about last year, and the upcoming years ahead will be called nothing short of historical. The year, 2019 ended with River Rouge earning its first State Title against the Muskegon Big Reds. During the 2020 season, the Panthers played well to maintain their reputation. But the Covid-19 Pandemic placed a halt on all sports, causing devastating damage to programs throughout the state.

As pandemic restrictions started to lift, the football season resumed. River Rouge fought its way through a handful of nail biting away games to find itself back at Ford Field to defend its title. A hundred and six miles west, the Panthers of Dewitt made easy work of their schedule. The only game where a team scored more than six points, came from a 64-38 win against Grand Ledge early in the season. Dewitt came to Ford Field undefeated and wanted to leave that way.

River Rouge won the coin toss, and elected to kick the ball to Dewitt to start the game. Neither team could score on it's first drive. On Dewitt's next drive, Ty Holtz pushed it up the field to end it with a 15 yard touchdown pass to Blake Beachnau. The extra point put Dewitt up 7-0 early in the first quarter. River Rouge went deep on it's next drive, but penalties and incomplete passes kept Hrabowski out of the end zone. Dewitt didn't see a touchdown for the remainder of the first quarter either. Armorion Smith and the River Rouge defense was able to force Dewitt's third three-and-out to give Rouge the ball with two minutes left in the first quarter.

Rouge started the drive on its own six yard line, it outlasted the first quarter of play. Three minutes into the quarter Mareyohn Hrabowski hit Jalen Holley for a 52 yard touchdown. The conversion was good to Nick Marsh. Giving River Rouge an 8-7 lead on an eleven play, 94 yard drive. Holt took the ball for a fifty yard run on Dewitt's next turn at the ball. Five plays later Holt found Andrew Debri for a touchdown. Dewitt sinks the extra point to up the score 14-8.

The next touchdown didn't come until the closing minutes of the half. Ty Holtz threw a laser to Nicholas Flegler to bring the score up to 21-8. River Rouge got the ball to start the fresh half. A David Martin first down gave the Rouge side some momentum, but the drive was cursed by penalties and ended in a punt. Dewitt's next drive came with two time outs, a Holtz fourth down conversion, and a Holtz touchdown pass to Tommy McIntosh to move ahead 27-8.

River Rouge answered back fast. Hrabowski sailed the ball 48 yards to Nick Marsh to set himself up for a 4 yard touchdown run. The defending champions buckled down as they moved the score to 27-14. Dewitt kept their feet on the gas. Eating up the clock and scoring on the last play of the third quarter.

Hrabowski didn't take that lightly, he turned his arm on. Placing the ball in his receivers hands for a touchdown and two point conversion. That cut the score closer to 33-22.

Dewitt's next drive of the championship sealed the game for them. Andrew Debri led a twelve play, 60 yard drive. That ended with a Holtz touchdown and six minutes off the clock; pushing the edge 40-22. Hrabowski answered with a touchdown and a conversion that closed the gap to 40-30.

River Rouge kicked an onside ball that Dewitt recovered. Rouge could not answer back as the clock ended and the championship came to an end, placing Dewitt as the MHSAA Division 3 State Champions. Coach Rob Zimmerman, and the Dewitt Panthers won their first state title the same way Corey Parker and the Panthers of River Rouge won last year. Each panther left their all on the field, and should go home with their heads held high. 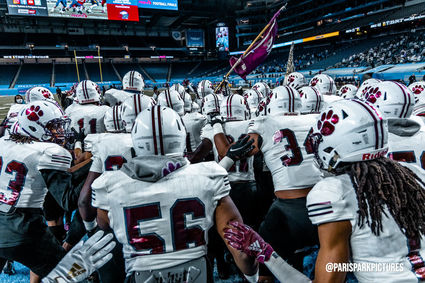 The season isn't over for either team. Dewitt travels home to enjoy their victory, and defend the title next season. Corey Parker is going back to the drawing board to make the adjustments he needs for his shot at getting the championship back downriver, and preparing to ship his seniors off to college. Congratulations to both teams on record breaking, historic seasons, and good luck to all players and coaches in the future.