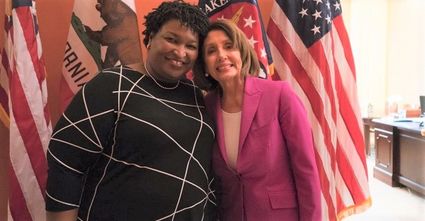 Stacey Abrams deliver the Democratic Response to the State of the Union. Her electrifying message reinvigorated our nation & continues to inspire millions in every part of the country." - House Speaker Nancy Pelosi, January 2019 / Office of the House Speaker

Both Stacey Abrams and the Black Lives Matter movement have been nominated to win the Nobel Peace Prize.

The nominations represent an opportunity for either Abrams or Black Lives matter to win over even more support around the globe should they win. The Nobel Prizes have been given out since 1901 and were started by Swedish industrialist and inventor Alfred Nobel. Prizes are given out for distinguished work in Chemistry, Physics, Physiology or Medicine, and Literature.

There have been many controversies around the Peace Prize and a win by Abrams or the Black Lives Matter would likely exte...